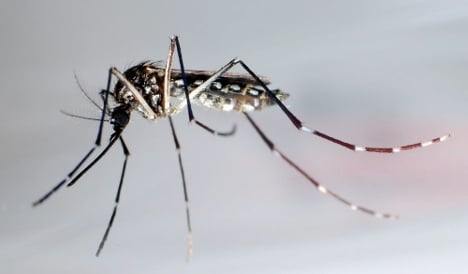 Although incidences of malaria in Germany are steadily dropping, other illnesses, such as dengue fever – which can cause flu-like symptoms, and in severe cases, death – have spiked.

About 600 cases of the disease were reported last year, twice as many as in 2009, Jonas Schmidt-Chanasit, a virologist at the Bernhard Nocht Institute for Tropical Medicine told Die Welt newspaper.

And for the first time ever, tourists came from France and Croatia with the pathogen in their system.

“This should be monitored closely,” said Christian Meyer, another expert at the institute.

Although cholera occurs from time to time among well-travelled Germans, it has showed up among new patients recently. In 2011, there were three cases among returnees from the popular holiday destination, the Dominican Republic for the first time, Die Welt reported.

The most common nasty symptom from a trip abroad remains diarrhoea – in some destinations, up to 80 percent of visitors are affected. The Robert Koch Institute (RKI), the Berlin-based government agency which monitors disease outbreaks, counts 600 cases of shigellosis, which can cause severe cramps, diarrhoea, vomiting and fever, each year in Berlin alone.

The report comes as experts fret that more animals are also being hit by tropical disease. Reports have emerged that that more blackbirds are dying from the African Usutu virus, which first emerged in Europe in Italy in 2009.