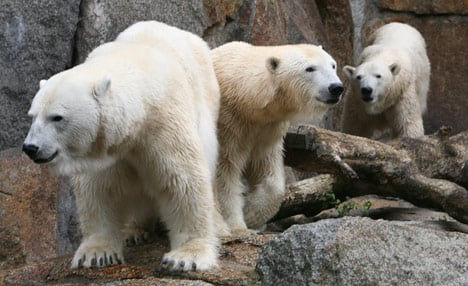 Animal lovers were shocked on Friday when two polar bear females, Tosca, Knut’s mother, and Nancy got involved in a violent scuffle.

The two females have brawled on several occasions ever since Troll, a male polar bear, moved into the enclosure. According to the DPA news agency, alarmed visitors have written letters to the zoo’s board complaining about the issue.

Heiner Klös, a biologist at the zoo, told the Sunday edition of the B.Z. am Sonntag newspaper that the fighting was related to the formation of a harem after the arrival of Troll. The bears are establishing a new hierarchy, Klös said.

The fights between Tosca and Nancy are often bloody and the zoo reported that Nancy has already lost one of her canine teeth.

When Knut lived in the enclosure, Tosca, Nancy and another female, Katjuscha, often attacked their famous companion, sometimes pushing him into the pool. Knut often retreated in terror to a small outcropping of rock in the enclosure.

Knut died unexpectedly on March 19 when he suddenly started convulsing and fell into the pool and drowned. Pathology experts have said that the bear’s apparent seizure was due to his suffering from encephalitis, a swelling of the brain likely triggered by an infection.