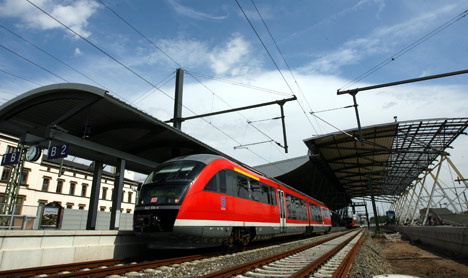 The father had put his son on the train then stepped off again to get his bicycle, the boy’s parents told the dpa news agency on Saturday. When the father saw what had happened, he yelled at the conductor to stop, but the train pulled out of the station anyway.

“We are very sorry,” said a spokesperson for Deutsche Bahn, the German railway company, who confirmed the incident.

According to police, passengers on the train saw the events and contacted the train staff, who took care of the child during the 37-kilometre (23-mile) journey. Personnel at the station also contacted the police as soon as they saw that had transpired.

The Bahn spokesman said due to those actions, he could not criticize the company’s employees, despite the “unpleasant and anxiety-provoking” situation.

The father was reunited with his child one hour later in Erfurt.

This was not the first time children have inadvertently made solo train trips with Deutsche Bahn. In March a two-year-old from Brandenburg was separated from her mother when train doors closed. During the same month in North Rhine-Westphalia, a mother busy with a pram on the platform watched as a train departed with her two young children, ages five and seven.