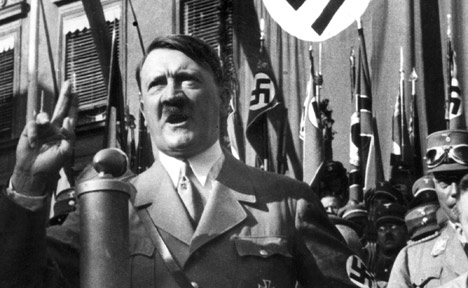 In “The Face of the Dictatorship: the Third Reich in 3D,” the historian and journalist Ralf Georg Reuth has assembled around a hundred images of Hitler, Nazi soldiers and major events of the era.

The book by the publisher Pendo comes complete with 3D glasses.

The author found the images in the archives of the National Library in Munich, where nearly 7,000 3D images taken by Hitler’s personal photographer Heinrich Hoffmann are stored.

Hoffmann produced his first volume of 3D images at the 1936 Olympics in Munich.

In his introduction to the new collection, Reuth, who has written several biographies of Nazi leaders, highlights how the regime used photography to promote its image.

“The first 3D images of the Nazis came out in 1936 and they kept appearing for as long as there were victories to celebrate,” he said. Around 20 albums were produced and went on sale between 1936 and 1942.

“The annexation of Austria and special days out organised by the party were among the best-sellers.”