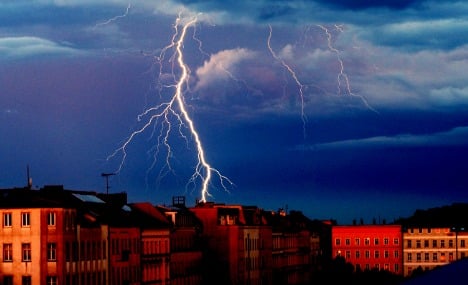 Though not all of the country will agree, temperatures officially have been too warm for September – even five degrees Celsius above normal in the south of Germany – according Tanja Dressel, a meteorologist for the German Weather Service (DWD).

However, the rain quota has already reached 100 percent in the east, while western regions have been much drier. And there’s a wide-spread lack of Vitamin D: in many parts of Germany, the sunshine meter is only half full, Dressel said.

Nonetheless, fickle weather patterns will continue into the weekend, according to DWD forecasts, with high pressure system Paula being replaced by the low pressure front George, which will bring showers and thunderstorms from the west beginning Friday night. The stormy trail will continue across Germany on Saturday.

“All in all, the temperature level will remain relatively high,” said the DWD’s Ansgar Engel. “Only on Sunday will cooler air from the west prevail, so that we’ll have to say goodbye to temperatures over 20 degrees.”

Through Friday afternoon, the heaviest cloud cover will be seen in northern Germany, with sunshine or scattered clouds in the rest of the country. However, by late afternoon, thicker clouds will build up in the south and west, leading to showers and possible thunderstorms. Temperatures will range from 15 to 20 degrees in the north, 19 to 24 degrees in the south and west and may reach 25 in the Upper Rhine region.

On Saturday, cloud cover will be prevalent from the southwest through central Germany, later expanding into the east. Heavy rain and local thunderstorms will also occur. Clouds and showers will also pass through northern Germany, while only scattered showers are expected in other regions. Southeastern Germany may even remain pleasant for much of the day before thunderstorms develop. Temperatures of 18 degrees are expected in the north, around 25 degrees in the south.

Sunday’s weather will be variable – cloudy in southern and eastern Germany with extended rain and thunder, otherwise with scattered rain. In the Alps, the snow line will sink to 1,500 metres, and a cool, at times strong, westerly wind will come out of the southwest. Highs will be between 13 and 19 degrees.

Leading into Monday, the forecast will clear up slightly, though temperatures will remain lower, mostly hovering around 10 degrees. Cloudy skies will still be prevalent over greater Germany with showers concentrated mostly in the west.

“You shouldn’t entirely write off comfortable late summer weather, though,” Engel said. “By mid-week, at least for southern and mid-Germany, there are hints of more sunshine and rising temperatures.”