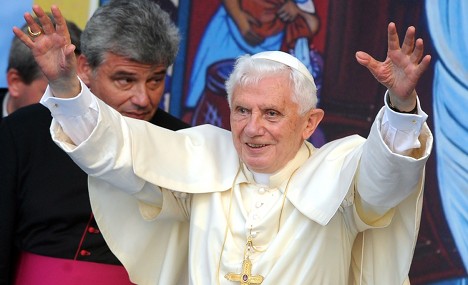 Officials didn’t say how big the security force protecting the pope would be or elaborate on the exact reasons for the extreme precautions.

The window restrictions will only apply to the pope’s trip through Berlin to the city’s Olympic Stadium on September 22, police said. Residents are being told that while they can observe the 84-year-old passing by, they shouldn’t open their windows to wave.

The Muslim extremist is a 26-year-old living in Freiburg who was previously convicted of assisting prospective terrorists. Under a court order, he will be forced to temporarily move when the pope visits the southwestern German city.

Police have told residents of Freiburg, Berlin and Erfurt, where the Pope will spend his time from September 22 to 25, to prepare for additional road closures and restrictions on movement.

University of Münster sociologist Detlef Pollack said he didn’t expect major protests because “the group of people against the pope in Germany is small and heterogeneous.”

But the Lesbian and Gay Association of Berlin-Brandenburg said it expected up to 10,000 at a demonstration on the day the Benedict XVI arrives in the country. The group is hoping to highlight what it says is the Pope’s anti-homosexual stance.

Another protest of sorts is being planned in the Bundestag, where 100 leftist opposition members have said they will boycott the pope’s address to parliament on September 22. This has sparked outrage from Catholic leaders in Germany.

The Catholic Church said the Pope will speak about the church’s future while emphasizing the “fundamentals” of faith during his visit. But he won’t touch on controversial issues such as celibacy. He’ll deliver 18 sermons and speeches during his trip.

“Benedict XVI wants to return to the basics, rather than limit himself to

particular points,” said Vatican spokesman Federico Lombard, who added that the pontiff may meet with victims of sexual abuse in Germany.