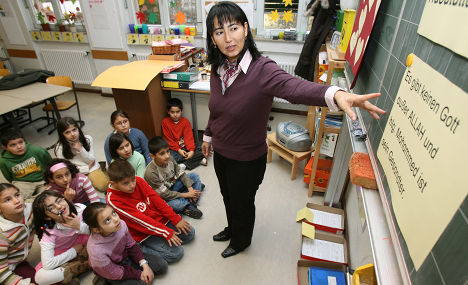 The report, which was presented at the foreign ministry in Berlin, was billed as the first of its kind in Europe.

“Islam is always presented as an outdated system of rules which has not changed since its golden age,” Susan Krohnert-Othman, the institute’s project director, told reporters.

The researchers concluded that Islam was frequently presented as a homogeneous entity without reflecting its diversity in different parts of the world. The report did not find major differences between the five countries studied.

The textbooks used at the secondary school level frequently set an “antiquated Islam” against a “modern Europe” and depict them as in conflict with each other.

“Even modern European school books include oversimplified presentations of Islam and they stand in the way of a credible inter-cultural dialogue with the Muslim world,” said Germany’s minister of state for European affairs at the foreign ministry, Cornelia Pieper, after reading the study’s findings.

The researchers called on schools to present information on reforms advocated by Muslim clerics and intellectuals as well as the modernisation process within the religion.

And they said instruction on cultural diversity needed a major overhaul.

“Muslims must no longer be classified as a separate group consisting of non European immigrants whose traditions prevent integration,” the researchers concluded.