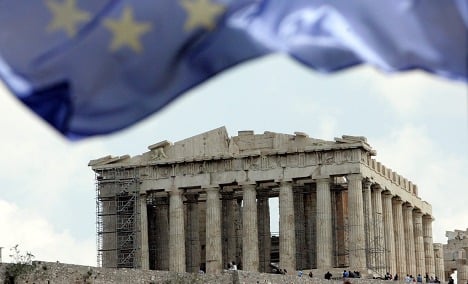 The backing from two of Europe’s major economies came after a conference call late Wednesday with Greek Prime Minister George Papandreou, against the backdrop of mounting international pressure on the Europe Union to get its house in order.

Rising expectations of a Greek default or even an inglorious exit from the eurozone continued to shake the markets. The fear is that Athens will be unable to apply an EU-IMF recovery plan.

But French President Nicolas Sarkozy and German Chancellor Angela Merkel “are convinced that the future of Greece is in the eurozone”, the French president’s office said in a statement after the three-way talks.

“The Greek prime minister confirmed his absolute determination to put in place all the necessary measures to carry out all of the commitments made.”

Athens has been warned that failure to overhaul its economy could cost vital funds out of the 110-billion-euro ($150-billion) EU-IMF bailout that rescued it from bankruptcy last year.

International auditors are set to return to Greece. If they decide not to unlock the next eight-billion-euro tranche in rescue loans, Athens would run out of cash next month.

A new 159-billion-euro lifeline also hangs in the balance, with some eurozone members increasingly frustrated at Athens’ delay in enacting agreed reforms.

There is uncertainty too as to whether enough banks will express interest in an initiative to ease Greece’s huge debt burden by agreeing to exchange maturing bonds with longer-term obligations.

Sarkozy and Merkel stressed in a statement that “now more than ever it is indispensable” to implement the measures agreed at a July 21 eurozone summit aimed at stabilising the eurozone.

At that meeting, eurozone leaders approved the second Greek bailout as well as increasing the amount and the powers of the eurozone’s temporary bailout fund, the European Financial Stability Facility, the EFSF.

Talks on Friday in Poland between EU and eurozone finance ministers and central bankers could prove decisive in breaking the deadlock in Europe over a demand by Finland for Greek collateral.

Prompted by increasing anti-European sentiment at home, Helsinki made that a condition for approving the new EU bailout.

The move has proved divisive and threatens to unravel a deal that already risks being delayed, as some countries have signalled they may not approve it for months.

Merkel this week sought to put out the fire caused by several German officials’ comments that an orderly insolvency for Greece or even a eurozone exit was possible.

Analysts say the markets are pretty much already working on the scenario of a Greek default.

But the mixed signals at the top have left investors concerned that policy makers would not be able to stop the shock waves from spreading throughout the eurozone.

Around the world, patience is running out with the European Union.

China’s premier Wen Jiabao called on European governments to “put their own house in order”.

And US Treasury Secretary Timothy Geithner said Wednesday European states “now recognise they are going to have to do more” to resolve the crisis.

A measure of the seriousness of the situation is that he will attend the talks in Poland this weekend.