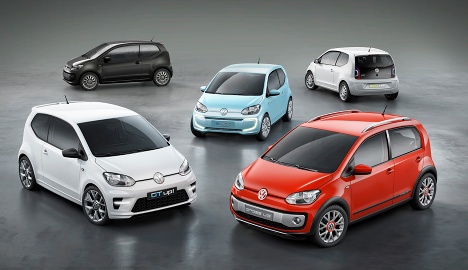 In the past, they built their reputations on sleek sports cars and luxurious limousines that were generous in their fuel consumption.

But with customers increasingly environment conscious and concerned about rising petrol prices, their launches at the Frankfurt Motor Show (IAA) will mark their move into what is already a crowded market.

This year, the main attraction at the stand of Volkswagen, maker of the iconic Beetle and Golf models, is its brand new city car, Up!

Measuring a mere 3.54-metres (11.61-feet) in length, it is VW’s smallest model and is aimed at city-dwellers in developed economies who are ecology-conscious and also feeling the pinch of the economic crisis.

Following the market launch of Up! in December, Europe’s biggest carmaker is planning a complete “New Small Family” range, as well as electric versions of the new models from 2013.

Underlining the city car as an essential part of its strategy to become the world’s leading carmaker by 2018, VW also unveiled its new Nils concept car – a futuristic, see-through one-seater – at this year’s IAA.

Nor are the more upmarket makers remaining idle.

Daimler’s Mercedes-Benz brand is presenting a rejuvenated version of its B-Class and a prototype of its electric Smart car.

BMW meanwhile is unveiling its i3 concept electric car, as well as new versions of its Mini.

Stefan Bratzel, auto industry specialist at the University of Applied Sciences in Bergisch Gladbach, said the main challenge for German auto makers would be endurance in an already crowded sector.

The outlook appears to be favourable in Europe, where the overall market share of compact cars has risen from 30 percent in 1990 to more than 40 percent today, according to the European auto industry association AECA.

“If a manufacturer wants to achieve a global presence, it must offer something in this segment” to win the middle classes in countries such as China, India or Brazil, Bratzel argued.

Only North America appears to be resisting the trend so far, according to

rival Mercedes-Benz never really took off on the other side of the Atlantic.

German manufacturers also face stiff competition in the sector from French and Asian rivals, said Ferdinand Dudenhoffer of the Center for Automotive Research at the University of Duisburg-Essen.

VW, in particular, “has no experience whatsoever in low-cost cars,” Dudenhoffer argued.

“We wish them lots of luck,” said Renault’s number two, Carlos Tavares, when asked about Volkswagen’s move into the segment.

“There is clearly a trend towards ‘downsizing’ in Europe. But the more fragmented the market is going to become, the more complicated it will be,” he said.