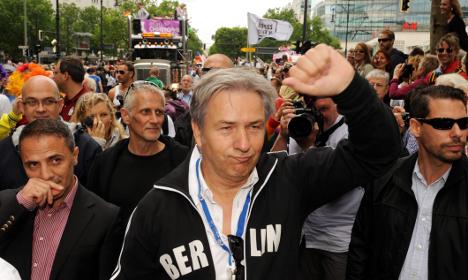 Social Democrat Wowereit, who looks to be a shoo-in for a third term after Sunday’s local election, became the leader of the German capital in September 2001, at a time when the once-divided city was still trying to find its stride.

A debt-mired metropolis with no industrial base, it had only two years previously resumed its role as the seat of the German government and the new mix required a leader who could help turn its weaknesses into strengths.

Enter Wowereit, who famously announced his homosexuality shortly before his election in 2001 with the words “I’m gay, and that’s a good thing,” which has become something of a motto.

His gift for such catchphrases – he cooked up the “poor but sexy” line in 2003 – and easy-going charm have given him a profile far beyond his metropolis of 3.5 million.

Explaining his enduring popularity to foreign reporters last month, he said simply, “Wowereit and the city, it’s a good fit.”

Berlin has come to be called one of the coolest cities on the planet in international media due to cheap rents and a bustling nightlife that have attracted hordes of artists and tourists.

Auspiciously for Wowereit, it is also one of Germany’s 16 states, making it a potential launch pad for a career on the national stage.

A member of the Social Democrats’ leftist wing, 57-year-old Wowereit has figured on the shortlist of possible challengers to Chancellor Angela Merkel, a conservative who has been in power since 2005.

“There is a reason for it all – because Berlin is not being governed like it deserves to be,” she told a rally last week.

Wowereit was born in 1953 in West Berlin to a single mother and headed to law school before entering politics.

Detractors call him a champagne-quaffing lightweight more interested in partying than governing and whose coalition with the far-left Linke party has left the city with a staggering €62-billion ($84-billion) mountain of debt – the highest of any state.

Wowereit and his long-time partner, doctor Jörn Kubicki, are fixtures of Berlin’s whirlwind party scene but the mayor has worked hard in recent years to gain gravitas.

Gone are the days when he was caught on camera smooching a female cabaret singer, a close friend, and sipping bubbly from her shoe.

Berlin’s centre-left daily Tagesspiegel acknowledged that Wowereit had made some economic headway in his 10 years as mayor by making it much more attractive for tourists and creative types but said his policies were unsustainable.

“Berlin still receives major subsidies and those are supplied on credit,” it said.

“Berlin’s economic model works purely at the expense of other German states and future generations. To change that, you have to look more to industry.”

News weekly Der Spiegel said it was not Wowereit’s policy achievements but rather his staying power as such that would see him sail to another term in his tumultuous city.

“There is so much change here every week that the longing for stability has been larger than its desire for change for quite a while,” it wrote.

“Everything continues to spin but one thing remains: Klaus.”