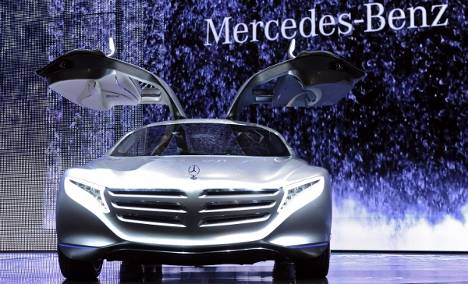 Set to be presented to the public at Frankfurt’s IAA car show later this week, the F125 is meant to show what a Mercedes S-Class driver can look forward to in 15 years.

The spacey vehicle, which takes its name from the carmaker’s 125th anniversary celebrations of the invention of the automobile this year, updates Mercedes’ penchant for gull-wing doors and combines sleek lines and a futuristic interior.

A control and display system based on touch, speech and hand-gestures allows the driver to interact with the car and even open the doors with a wave of the hand.

But the real innovation is under the bonnet, where Daimler has combined an electric motor with a hydrogen fuel cell to give the luxury four-seater a range of 1,000 kilometres.

The emissions-free hybrid offers insight as to how the German carmaker might attempt to avoid the limitations of completely electric models.

Daimler said the real breakthrough was integrating the hydrogen tank into the floor assembly for greater capacity. The body is an amalgam of lightweight reinforced plastics, carbon-fibre, aluminium and high-strength steel.

“With the F125 we want to show that large, comfortable and safe saloon cars have an excellent future, partly because they are able to operate with no emissions,” said Daimler executive Dr. Thomas Weber in a statement.