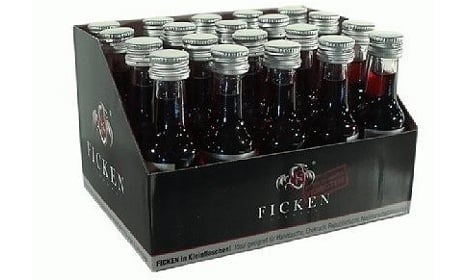 The firm sells a drink made with berries and vodka predominately in 0.02 and 0.03 litre shot measures under the name Ficken.

It has also launched a huge range of allied products such as T-shirts, hats, underwear, and stickers and even condoms bearing the logo and the profanity – all clearly designed to titillate a young customer base.

Applications to trademark the name Ficken – which means “fucking” in German – were first rejected by the German Patent Office, on the grounds that it was immoral.

But this was rejected by the patent court, which ruled that Ficken could be registered when used as a name on clothing and for drinks. This cleared the way for the beverage company EFAG, based in Altheim in Baden-Württemberg, to secure rights to its potty-mouthed brand.

Even the company itself admitted there was no question of the use of Ficken being in good taste, but said the moral arguments against using it were too old fashioned to carry any weight.

The court agreed, saying that the fact that the word had sexual connotations and was vulgar language was not enough reason to rule out a trademark on moral grounds.

The court also said that the frequent use of the word in literature and film had reduced its ability to shock to such a degree that, “today it is barely considered offensive or sexually-provocative.”