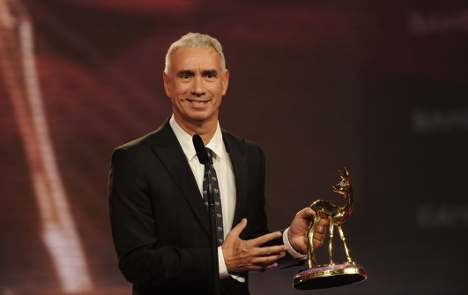 Emmerich, who directed big-budget environmental disaster movie “The Day After Tomorrow” in 2004, told the Berliner Zeitung newspaper on Monday that he had wanted to vote for the Green party in his native state of Baden-Württemberg earlier this year.

But his mother prevented him exercising his democratic rights from his adopted home in Los Angeles. “She gets so annoyed that I vote Green,” he said. “Ever since my mother read that I vote Green, she’s stopped sending me the absentee ballot forms.”

Emmerich said he was not surprised that his fellow Swabians elected Germany’s first ever Green state premier in March this year, and put the victory down to the controversial railway station construction planned in the state capital Stuttgart.

“The Swabians are basically very conservative and stubborn,” he explained. “But when a project like Stuttgart 21 offends the whole population, then the Swabians stand up. Then they fight.”

The Hollywood director, who has been working in the US film industry for over 20 years, also revealed that he recently became a US citizen partly so he could support President Barack Obama.

“On the one hand, I wanted to have a vote in the next US elections,” he said. “Because Obama is going to need every vote he can get. And I didn’t want to become an American under Bush.”

But Emmerich – who has kept his German citizenship – said he was not interested in joining the Democratic Party, unlike another prominent German émigré director Wim Wenders. “I’d prefer not to be tied to any particular party,” he said, though he admitted hosting fundraisers for the Democrats.

The soft-spoken Swabian is the man behind some of Hollywood’s major popcorn movies in recent times, including “Independence Day” and “2012.” He is currently in Germany promoting his new film about Shakespeare “Anonymous.”