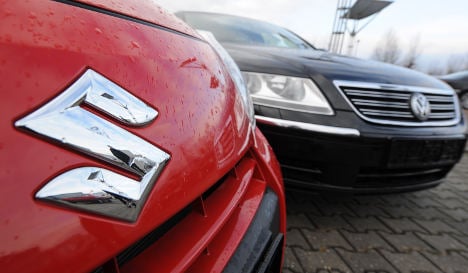 Yet Volkswagen said it had no plans to end the cooperation, and was not planning to sell its shares in Suzuki.

“We’re still interested,” in the alliance,” a spokesman said on Monday. “We stand by what we’ve always said and what we said again yesterday,” he said, pointing to a company statement in which the firm insisted Suzuki remained an attractive investment.

Volkswagen’s purchase of a 19.9 percent stake in Suzuki in December 2009 had been seen as an opportunity for both carmakers to benefit from their respective strengths in hybrid and small-car technologies.

But Volkswagen said back in July that the partnership was progressing more slowly than expected, and said it would carry out an assessment of how things were going.

The Germans then said on Sunday that the contract had been broken by Suzuki’s ordering of diesel engines from a third party – which industry insiders said was Fiat. Volkswagen gave Suzuki a deadline of several weeks to change things – prompting Suzuki’s cancelling of the entire partnership.

Suzuki said it had asked Volkswagen to end the capital alliance between the firms and unload its stake, in a statement issued through the Tokyo Stock Exchange.

“We will ask Volkswagen AG to dispose of (Suzuki) shares in correspondence with our company’s intentions,” it said, adding that it would dispose of its shares in the German automaker in the same way.

The Japanese automaker holds about 1.5 percent of the German company, or 4.39 million shares, a Suzuki spokesman said.

The €1.7 billion ($2.3 billion) alliance turned sour after Suzuki felt its autonomy was being jeopardised and that it was being treated like a subsidiary by Volkswagen.

In a loaded statement on Monday, Suzuki said it was seeking “genuine business partners” among automakers at home and overseas “with which we have no capital ties”.