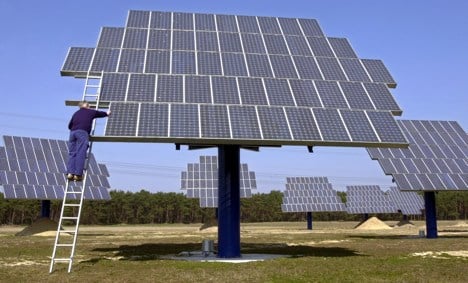 He told a press conference in Salonika that he planned to travel to Germany late this month to discuss the project with Chancellor Angela Merkel during a meeting of German industrialists.

“We can supply the Germans with 10,000 to 15,000 MW”, he said, underscoring the urgency for Greece to fight “corruption and bureaucracy,” which in the past have derailed several investment projects.

Papandreou spoke of a “huge interest” in Germany for Greece’s renewable energy resources in view of of its plan to phase out nuclear energy and doubts about the political stability of Arab Mediterranean countries.

“There was a (solar) project in the Sahara, but it is in jeopardy because of the political turmoil,” he added.

His remarks also came as German Economy Minister Philipp Rösler said Europe could no longer rule out an “orderly default” for Greece as it struggles with a crippling debt crisis.

“To stabilize the euro, we must not take anything off the table in the short run,” Rösler, who is also Germany’s vice chancellor, wrote in the column for the conservative daily Die Welt to be published Monday.

“That includes as a worst-case scenario an orderly default for Greece if the necessary instruments for it are available,” he said, reviving an idea that surfaced last year to grapple with the turmoil within the eurozone.

Eurozone leaders announced a €159-billion ($223-billion) rescue package for Greece in July, but German Chancellor Angela Merkel insisted on Sunday that the Greek government must not waver in its reform drive.

After a recent visit by a German official as part of a joint bid to boost investment to spur a Greek recovery, the German environment ministry said it was looking into a project to set up 20,000 hectares of photovoltaic systems to turn solar energy into electricity for export to Germany.

Press reports said the mammoth project dubbed “Helios” (the Greek God of the sun) would have an initial budget of €20 billion and would create between 30,000 and 60,000 jobs in Greece.

Rösler is due to visit Greece next month to further a bilateral cooperation accord on developing renewable energy.

Athens is trying to attract investment in renewable energies to replace jobs lost due to the recession which has been exacerbated by the austerity measures demanded by the EU and the IMF in exchange for a multi-billion euro rescue package to deal with the crippling debt burden.