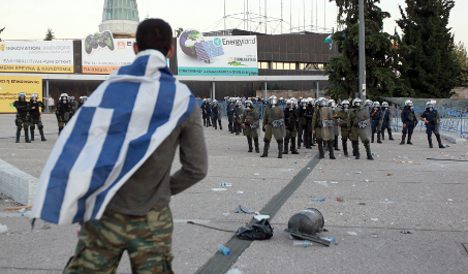 His officials are reported to be preparing for several scenarios that might arise should Athens go bankrupt.

There are two possible outcomes, in the view of the ministry. Either the country stays in the euro zone, or it re-introduces its former currency, the drachma.

A key consideration in Schäuble’s thinking is the EU’s bailout mechanism, the European Financial Stability Facility (EFSF). A crisis summit in July made provision for expanding the mechanism’s powers.

Two key instruments of the EFSF could come into play in the event of a Greek bankruptcy. The first are contingent credit lines, which would help countries like Spain or Italy if investors were to stop lending them money following a possible Greek insolvency. In addition, banks in numerous euro-zone countries could be reliant on aid from the EFSF if they had to write off billions in Greek government bonds. This is likely to happen regardless of whether or not Greece holds on to the euro.

The governor of the state of Hesse, Volker Bouffier, like Schäuble a member of Chancellor Merkel’s conservative Christian Democrats (CDU), said that a mechanism should be developed quickly to allow countries to leave the euro zone.

“If the Greek government’s austerity and reform efforts are not successful, then we must ask ourselves if we don’t need new rules, that would allow for a euro-zone country to exit the currency union,” he told Der Spiegel.

Euro-zone leaders announced a €159-billion ($223-billion) rescue package for Greece in July, but Athens is having difficulty meeting the conditions to receive its next instalment of funding, with sufficient cash in reserve for only a few weeks.

Last Thursday, Schäuble warned Greece that it must fulfil the conditions set down by the euro zone if it wants more help with its debt crisis. He said it was “very premature” to talk about a second bailout package for Greece before it had implemented the reforms required to receive its first full disbursement.

Meanwhile Chancellor Angela Merkel has asked the German people to be patient with Greece. “What has been neglected over years cannot be done overnight,” she told the Sunday edition of Berlin’s Tagesspiegel newspaper, pointing to Germany’s bid to rebuild the infrastructure in former communist East Germany after the fall of the Berlin Wall.

“Remember the reunification process,” said Merkel who grew up in East Germany. “How much time it took in the early 1990s to rebuild new administrative infrastructures, share know-how and privatize.”

“We must be patient,” she said. However, she also called on the Greek Prime Minister George Papandreou not to waver in his reform drive. “Greece knows that credit is only available if it meets its obligations.”

Papandreou vowed Saturday to stick to the austerity demands of his debt-ridden country’s creditors despite mounting street protests against the measures.

“At the point where the eurozone is now … every delay, every hesitation, every option other than strict compliance with our commitments … is dangerous for the country and its citizens,” he told a political gathering as about 25,000 anti-austerity protesters took to the streets nearby.

“Every time we have postponed or hesitated, it has cost us dearly,” the premier said in his traditional post-summer break address, promising to take “all other necessary measures” to ensure the country meets its commitment to reducing the budget deficit. “We will prove wrong all those who are betting on the country to fail.”