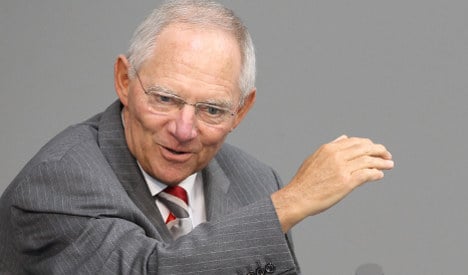 According to newsweekly Focus, Schäuble is widely regarded as the most likely successor to Luxemburg’s Prime Minister Jean-Claude Juncker when he steps down in January 2012.

The role is a vital one, coordinating the work of the finance ministers in the euro zone, the group of 17 EU member states that use the euro as their common currency.

The role of Eurogroup chief is likely to evolve as the coordination of euro-zone policy becomes increasingly important. The job could in future be a full-time position and is most likely to be occupied by a current or former finance minister.

“When names are being discussed, then the one that comes up the most is that of Germany’s Schäuble,” reported the magazine, quoting diplomats. “If he wants it, it’s his.”

The government in Berlin has so far not confirmed that Schäuble, a member of Chancellor Merkel’s Christian Democrats (CDU), will take on the role. Officially it has not yet been decided how the Eurogroup chair will be selected. The EU treaties may have to be altered to give the position more power.

Markus Ferber, the leader of the Christian Social Union, Bavarian sister party to the CDU, in the EU parliament, spoke in favor of Schäuble heading the Eurogroup.

“Wolfgang Schäuble is certainly someone who would be the very well suited to the job,” he told Focus. “Germany should lead politically, in order to ensure that a culture of stability is achieved throughout Europe.”