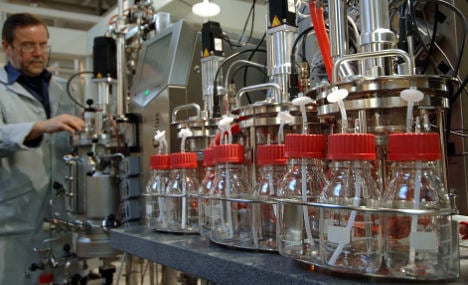 Germans have generally been cautious when it comes to the subject of genetic engineering – witness the sustained opposition to GM crops. But that hasn’t been the case when it comes to producing drugs which can save lives. These days, Germany is one of the most important research and production sites in the world for these biotech products.

Producing tailor-made therapeutic proteins including antibodies which, for example, might seek out cancer cells and attack them without harming surrounding tissue, can only be done using genetically engineered cells such as bacteria, mammalian cells or yeast cells.

Rolf Hömke, spokesman for vfa bio, the lobby group representing the German medical biotech industry, told The Local that the production technology was much like brewing.

“Effectively you take the genetically altered bacteria, mammalian cells or yeast, and let them ‘be fruitful and multiply’ in a big fermentation plant, just like making beer,” he said. “In the history of technology there is a straight line from beer brewing, penicillin production and now biotech production using transgenic cells.”

First comes the complicated scientific work of editing the DNA of the cell to make it produce what is needed, then it’s allowed to proliferate.

Hömke said the traditional German angst of all things genetically engineered had hampered the creation of a domestic biotech industry, but that this had changed in the late 1990s.

“Historically the German population and many policy makers had been against the concept, seeing it as unsafe, amid fears that genetically altered organisms could end up in the environment and turn out to be harmful,” Hömke said.

“But at the end of the 1990s this changed after policy makers committed a significant amount of money to supporting start-ups and cluster formation and encouraged many scientists who wanted to develop commercial products based on their research findings.”

He said seeing that drugs such as beta inteferon for multiple sclerosis and alpha interferon for hepatitis C give relief to patients with previously untreatable diseases helped convince sceptical Germans.

“The first biotech drugs for rheumatoid arthritis and cancer were making progress. This showed many people that this technology was indeed beneficial and worth supporting,” he said.

The main safeguard against a feared outbreak of genetically modified organisms is that they are dependent on the very specific conditions provided in the fermentation plants – specific nutrients in particular. Without them, the organisms die.

A recent survey of the sector conducted by The Boston Consulting Group showed there were 383 biopharma companies in Germany in 2010, 114 of which were developing their own drugs. The sector employed 35,460 people in Germany last year. They were working on 99 drugs which are in the final stages of clinical testing before being considered for market licenses.

Little biotech companies, often run by scientists in cooperation with the teaching hospitals or research institutes, are now of enormous interest to big pharma. As the traditional pharmaceuticals industry is repeatedly hit by the expiry of patent protection on its biggest cash-generating drugs, meaning competitors can sell much cheaper copies, the large companies are becoming desperate for new ideas and new products.

And as their own research and development departments fail to deliver the number of potential drugs demanded by planners and investors, the firms are increasingly turning to the small biotech firms for new medical ideas, making investments, setting up cooperation agreements and often simply buying them outright.

Biotech products accounted for 17 percent of German pharma turnover last year, and is expected to do at least that this year.