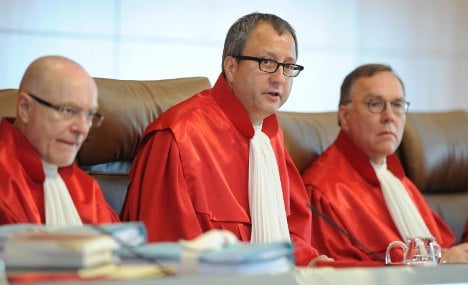 In a landmark ruling eagerly anticipated by jittery financial markets, the Constitutional Court in Karlsruhe said all “large-scale” future aid packages must be approved by the parliament’s budget committee.

“The federal government is required to seek the approval of the parliament’s budgetary committee before handing over guarantees,” Chief Justice Andreas Voßkuhle said, reading out the judgement.

In addition, the court ruled that parliament must have “sufficient influence” over the conditions attached to future rescue deals, likely limiting Chancellor Angela Merkel’s room for manoeuvre if new crises blow up.

It may not approve deals that could lead to an unforeseeable burden on future parliaments, the court also ruled.

Moreover, the judges insisted that parliament may not approve any deal that leads to a pooling of national debt, apparently ruling out the idea of “eurobonds.”

“This is what the constitutional court confirmed without a doubt: responsibility for one’s actions and solidarity – solidarity and a transparent, open way of operating, of course with the co-determination of the parliament,” she told deputies. “That is exactly the road we have taken.”

But economists fear that requiring parliamentary approval for future rescue deals may slow down the process of helping debt-wracked eurozone nations, where rapid decisions to stem swift market moves are often required.

The court was ruling on a case brought by six eurosceptics, who argued that the bailout of Greece in May 2010 and subsequent setting-up of the eurozone bailout fund, the EFSF, broke EU and German constitutional law.

The judges ruled against their argument that the rescue package removed parliament’s budgetary room for manoeuvre and ability to debate future budgets.

The verdict comes weeks before the German parliament votes on extending the EFSF amid mounting scepticism both from politicians and from the public, with Merkel facing a rebellion from within her own centre-right coalition.

The ruling also came at a time of high political tension in Europe’s other major economies over the debt crisis, with governments scrapping to get much-needed austerity measures agreed in parliament.

In Spain, thousands marched on Tuesday against a plan to enshrine balanced budgets in the constitution – following Germany’s example – and demanding that the issue be put to a referendum.

The Italian government has put forward new austerity measures and called for a confidence vote in parliament, allowing the Senate to vote on Wednesday on the €45.5-billion ($64.0-billion) plan.

French deputies are also in the process of debating strict austerity measures.