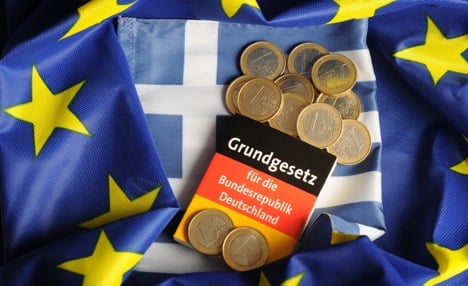 Jittery financial markets will be casting a nervous eye towards the Constitutional Court, as will Chancellor Angela Merkel, who faces a crunch parliamentary vote on strengthening the EFSF rescue fund later this month.

Experts do not expect the court to slap down the EFSF, but many believe it may insist Germany’s parliament has more say in any future rescues, which markets fear will slow down the EU’s reaction time in future crises.

The court will “set strict conditions for future support packages, insisting that any significant decision on help for other euro members needs to be approved by the German parliament,” said Holger Schmieding from Berenberg Bank.

The judges will rule on a complaint brought by six eurosceptics, who argue that the initial €110-billion ($154-billion) EU-IMF rescue of Greece in May 2010 and the setting up of the EFSF contravenes both German and EU law.

They say the rescues, for which Germany has set aside billions of euros worth of guarantees, break the “no bailout rule” in the EU treaties, which says one member state may not assume the debt of another.

The rescue packages are made up of loans, which in the case of the EFSF are made from funds raised on the markets against guarantees provided by eurozone governments.

The court ruling comes just weeks before the German parliament, the Bundestag, votes on strengthening EFSF amid mounting scepticism both from politicians and from the public, with Merkel facing a rebellion from within her own coalition.

The boosting of the effective lending capacity of the EFSF from €250 billion to €440 billion means that German guarantees will rise from €123 billion to around €211 billion.

Several deputies have indicated they might abstain or even vote against the bill when it comes up for vote, probably on September 29.

She is assured of a majority as the opposition Social Democrats and Greens have both said they will back the bill, but it would be a humiliating defeat for Merkel, already weakened by poor regional election results recently.

The exact wording of the bill, including the extent of parliament’s involvement in future rescues, has been left until the court hands down its ruling.

But a draft drawn up by deputies from Merkel’s coalition, seen by AFP, proposes that Germany’s representative in the EFSF should veto rescue deals unless the parliament has agreed to it.

According to recent polls, the German public also believes parliament should make its views known when future packages are agreed at EU level but is also sceptical that ever-bigger rescue funds will solve the eurozone debt crisis.

“In the short-term, the news that the rescue fund as a whole is not declared illegal, could result in relief,” he said in a research note.

“However, on closer inspection, it should become clear to market players that any conditions (for future rescue packages) will slow down the decision-making process in Europe,” he added.

“In the final analysis, the decision of the Constitutional Court could therefore pressure the markets and the euro.”

The Constitutional Court is expected to deliver its verdict at 10am.