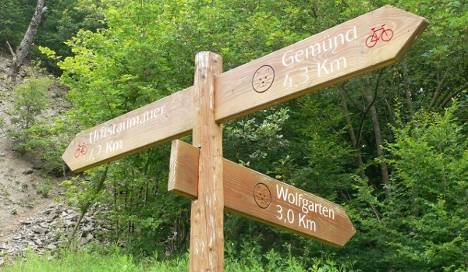 Founded in 2004, the Eifel national park has an extensive network of official bike routes. Despite the ubiquitous signage, it’s best to plot a route in advance. There’s nothing worse than pounding away for 20 kilometres only to discover that it’s the wrong way.

We settled on a route covering 150 kilometres in total. This was an ambitious target considering it was the first bike tour for one of my friends. On paper the inclines didn’t seem too steep for a group of novices, but the Eifel taught us a valuable lesson: don’t underestimate the mountains!

Advance knowledge of the inclines is the key to determining a suitable route. For example, in the flat expanses of Brandenburg a 90-kilometre day trip is a reasonable goal. But in the hilly Eifel region, the same target becomes a losing battle with gravity.

Another factor often overlooked by budget-conscious cyclists is the condition of the ride. It’s a good idea to have the bike inspected by a professional before riding out into the wilderness. A loose wheel bearing, stretched-out chain or weak tyre pressure can make a critical difference.

Under these circumstances it’s also important to travel lightly. Some of the must-haves include maps, a pump and tube repair kit in case of a flat tyre, a few essential bike tools and a mobile phone for emergencies. Suitable clothes should be packed a day before departure, keeping in mind that the Eifel is typically colder and wetter than the nearby cities.

We were off to an early start. After an uneventful hour-long train ride from Cologne we get off at a town called Kall, our starting point and final destination. I took a deep breath and immediately noticed the difference in air quality: crisp, fresh and clean. It was not the thick city air my body has come to expect.

The sky was overcast and just chilly enough to be wearing a light sweater in the morning hours. Although such weather was expected to last, later in the day the cloud cover would clear and it would turn into a warm and sunny day.

The weather is the great wild card of any bike tour. Because Germany’s climate can be somewhat unpredictable, it’s best to be prepared for rain and shine alike. According to the official Eifel website, the region enjoys fairly mild winters and relatively cool, high-precipitation summers.

On the trail of history

The trail took us out of the city and into the woods, where we followed the river Urft as it winds through the valley past the town of Gemünd. The first ten kilometres went by in no time, giving us the false impression that the trip was going to be a proverbial walk in the park.

At this point the path was following either a flat or downhill trajectory, allowing us to move along at a brisk pace. The unfolding scenery was a picturesque natural landscape dotted with medieval castles, rapeseed fields and traditional timber-framed houses.

We reached the Urfttalsperre, a majestic man-made river dam. Along the way we discovered an old army bunker from World War II that now serves as a bat cave. We then learned that this pristine area harbours a darker history.

When the Urft dam was built in 1905, it was Europe’s largest artificial reservoir. In the 1930s the National Socialists used the area to house Ordensburg Vogelsang, a military training facility that today is one of the largest architectural relics of the Nazi era.

The Urft valley was also part of the famous Battle of Hürtgen Forest, the longest battle on German territory during World War II and the longest single battle the US Army has ever fought. Some 33,000 American soldiers and 28,000 Germans were killed in the fierce fighting.

From Rurberg it was more of the same down to Einruhr and then west towards Monschau, one of the larger towns in the area. We put half of the day’s route behind us and it was well past noon, so we decided to take a detour into the town centre.

Monschau is a wealthy medieval town in the north-western part of the Eifel. The narrow streets are predominantly cobblestone, and the timber-framed houses have retained their original style for the past 300 years.

Climbing out of the valley

Shortly after leaving Monschau we encountered our first serious uphill stretch. This had to be the low-point of my journey: I was too full from lunch, it had become quite warm and suddenly I found myself facing an eight-percent incline with no end in sight. I had to dismount twice on account of my luggage and general fatigue.

The trail became hillier than when we started out, considerably slowing our progress. Fortunately, the steepest incline we encountered was downhill: on this nine-percent descent my friend achieved a peak speed of 68 km per hour, just below the speed limit for cars.

We followed the route south through Höfen right up to the Belgian border. From there it was more or less a straight shot along the designated bike trail through roughly 20 kilometres of forests and fields to Hellenthal, where our camp site awaited.

It was a long day, and right after checking into “Camp Hellenthal” we headed for the showers. The on-site restaurant was already closed, so we headed into town. We found a traditional tavern by the name of Posthalterei, the old German word for post office. A group of regulars was having a grand time, and the boisterous noise only accentuated the rustic Teutonic atmosphere of the place.

If the weather changes for the worse or the route is more challenging than anticipated, it’s nice to know a few shortcuts. Because the Eifel’s bike routes intersect at various points, it’s easy to shorten the original route if needed.

By the same token it’s always possible to take a scenic detour. The important thing is to have a map handy in order to navigate the new territory.

Although I hoped to cover all 150 kilometres of the original route, it turned out that I overestimated one of my friends’ ability to keep up the pace. His bike was in bad shape and it gave him trouble on the hills. We decided to cut the trip short, and take a 20-kilometre route from Hellenthal straight back to Kall.

There is one last piece of advice that many cyclists learn to appreciate after their first day trip: Of all the pain that an extended tour may inflict on its participants, there is nothing quite like the feeling of sitting on a hard and narrow saddle for hours on end. Padded underwear, though expensive, is well worth the cost.