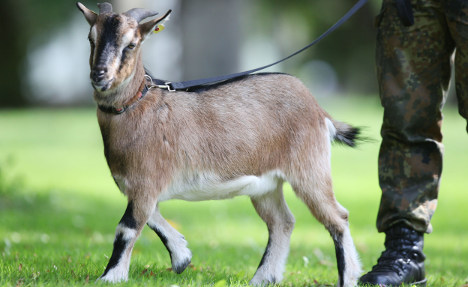 The Second Company of the ABC Defence Battalion, stationed in Höxter, near Gütersloh, North-Rhine Westphalia, has had a goat as its mascot since 1973.

Josef followed in the hoofsteps of his predecessors Franz-Josef, Charles and Erwin, taking part in battalion parades as well as public relations and ceremonial activities.

But Josef is a relative new-comer, having only been inducted into the army last July – complete with the appointment of a soldier to special goat duties, according to the Neue Westfälische newspaper.

Daniel Kleikemper was assigned to look after Josef – before joining the Bundeswehr he trained in animal husbandry, specialising in sheep and goats.

But now Josef is considered surplus to requirements. “A living mascot is no longer appropriate,” said commander Patrick Gaisbauer.

He is to be retired, although his exact fate has not yet been decided. But among the options being considered is a position at a children’s petting farm.

“He will certainly not end up at the slaughterhouse,” said Gaisbauer.

Josef was the last living animal used as a mascot by the Bundeswehr according to the Neue Westfälische.