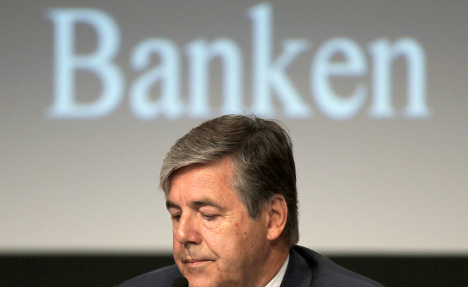 Christine Lagarde, the new head of the International monetary fund, said she believes it “necessary to recapitalise European banks so that they are strong enough to withstand the risks linked to the debt crisis and weak growth.”

Recapitalisation was required “to avert contagion” of the problems, she told Der Spiegel news weekly.

But Ackermann lashed out, telling a banking conference in Frankfurt on Monday: “The recent proposal for a forced recapitalisation of the European bank sector hasn’t really come to much.”

The Deutsche Bank CEO said that “a forced recapitalisation would give the signal that politicians do not themselves believe in the measures” they have implemented to bolster fragile eurozone countries.

Lagarde’s proposals were “counterproductive” as they exacerbated the eurozone debt crisis and scared investors, Ackermann added, as European banking shares dived on the markets amid concerns that Greece’s reform programme was coming apart.

Meanwhile, in Paris, the president of BNP Paribas, Michel Pebereau, said: “It’s not obvious that the European banking system as a whole needs to be recapitalised.”

As the row erupted, banking stocks continued to take a hit, with Deutsche Bank shares down nearly eight percent in mid-day trading in Frankfurt. Commerzbank was also suffering, down five percent. The wider DAX index of Germany’s 30 leading companies was down 3.5 percent.

Deutsche Bank shares were also under pressure as a result of a report in the Financial Times that Britain’s Serious Fraud Office was looking into some of bank’s deals.