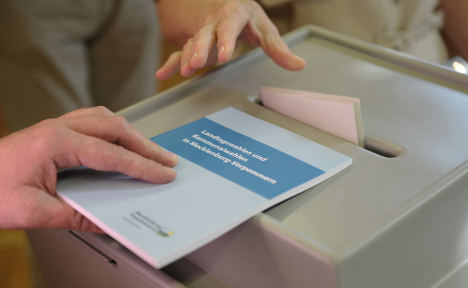 Some 1.39 million voters are called to the ballot box in the northeastern state of Mecklenburg-Western Pomerania, the sixth regional election in 2011, a so-called “super election” year that has proved disastrous for Merkel’s party.

In March, her Christian Democrats (CDU) suffered a humiliating defeat to a resurgent German Green party in the wealthy southwestern state of Baden-Württemberg that they had governed for nearly six decades.

In Mecklenburg-Western Pomerania, polls show the CDU is likely to garner between 26 and 28 percent of the vote, behind the Social Democratic Party (SPD), which is expected to win around 35 percent.

If the surveys are correct, the most likely outcome is a continuation of the “grand coalition” of CDU and SPD that has governed the region, bordered by the Baltic Sea to the north and Poland to the east, since 2006.

The hard-line socialist Left party is seen winning about 17 percent of the vote, with the Greens at eight percent.

Nils Diederich, a political expert at Berlin’s Free University, said the election, in one of Germany’s most thinly populated states, would make few waves on the national level, but was significant as it occurs in Merkel’s own constituency.

“A defeat would have a symbolic importance because it would show that the chancellor doesn’t have a strong voice, even in her home region,” he told AFP.

During campaigning in the region in former communist East Germany, which suffers from unemployment nearly twice the national average of seven percent, Merkel focused on the problems faced in faraway Greece, Italy and Spain.

“You shouldn’t be worried. The euro is a stable currency,” she told a campaign rally in Schwerin, the region’s capital.

“The crisis that is going on in the eurozone is not a euro crisis but a debt crisis.”

Profiting from the economic malaise in Mecklenburg-Western Pomerania, the far-right NPD has historically done well in the state, entering the regional parliament in 2006 with 7.3 percent of the vote.

However, polls show the party could fail to clear the five-percent hurdle for representation this time around, with 4.5 percent in the most recent surveys.

A similar fate could await Merkel’s coalition partners at national level, the pro-business Free Democrats, also polling at around 4.5 percent.

German media have speculated that a poor showing, if followed by another disappointing performance in elections in the city-state of Berlin on September 18, could cost unpopular Foreign Minister Guido Westerwelle, a Free Democrat, his job.

However, official final results will not be available for two more weeks as the CDU candidate in one district died, postponing the vote in that district by 14 days.

Moreover, the result in Mecklenburg-Western Pomerania will have no effect on the make-up of the upper house of parliament, the Bundesrat, where the regions are represented. The ruling coalition lost its majority there in 2010.