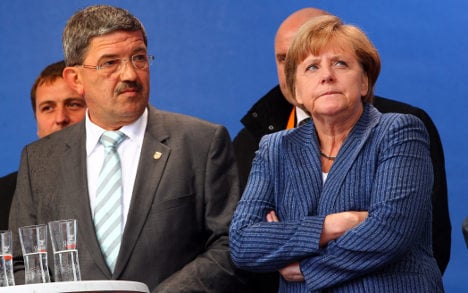 The election in Mecklenburg-Western Pomerania is the last but one in this “super election” year in which seven of the country’s 16 federal states vote.

The final election takes place on September 18 in the capital Berlin, which is a city-state.

The conservative Christian Democrats have fared poorly overall this year, losing power in Hamburg, Germany’s second largest city, and Baden-Württemberg, a densely-populated state in western Germany which they had ruled for more than 50 years.

Opinion polls suggest the CDU will win around 28 percent of the vote, in line with its share of the vote in 2006.

The Social Democrats (SPD), the CDU’s main rivals, are expected to improve on their 2006 score of just over 30 percent, taking perhaps 35 percent of the vote.

This will likely ensure that the current SPD-led coalition government is returned to power.

Chancellor Merkel, who won her seat in the federal parliament in Mecklenburg-Western Pomerania, a former East German state bordering, Poland has been campaigning there on behalf of her party.

But her message has been aimed at the country rather than the region as she used her campaign time to defend her government’s role in protecting the euro and helping bail out debt-strapped Greece.

Her intervention came ahead of a month-long debate in the federal parliament on the next rescue fund for the eurozone with Merkel facing possible rebellion by a handful of her own backbenchers who oppose further loans to what they see as spendthrift neighbours.

Parliament is expected to agree to widen the European Financial Stability Facility’s (EFSF) mandate, but it would be deeply embarrassing if the vote were carried only because of opposition support.

A final parliamentary vote is expected in late September. “You shouldn’t be afraid. The euro is a stable currency,” she told an election meeting Monday.

“The current crisis we are going through in the eurozone isn’t a crisis of the euro. It’s a debt crisis,” she said.

She also criticized both the Social Democrats and the Greens, who have advocated introducing eurobonds to bolster confidence in Europe’s common currency.

That would mean “all countries putting debts together in a common pot,” she said. “But I tell you, whoever lives on credit endangers his own future,” she added.

Germany, the economic power-house of Europe, is strongly opposed to running a public deficit over the long term and wants eurozone partners to agree to include debt-ceiling rules in their constitutions.

For Nils Diederich, political expert at Berlin’s Free University, the poll in Mecklenburg-Western Pomerania, isn’t likely to carry much weight at the federal level, because it is such a thinly-populated state.

“But a defeat would carry symbolic importance because it would show Merkel doesn’t even have a strong voice in her own home region,” he warned.