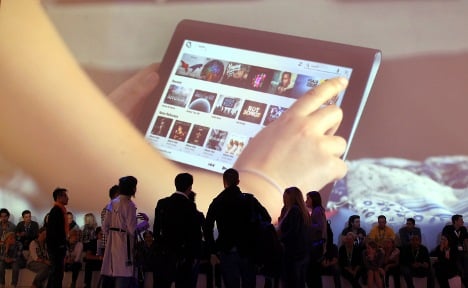 Fears of a recession have not hit the German capital, where fair organizers said they had expanded its exhibition surface by four percent as the number of participants edged higher to 1,441. The IFA attracted 235,000 visitors last year.

Apple’s shadow hovers once again over the event, which is often presented at the European equivalent to the Consumer Electronics Show in Las Vegas, Nevada.

Although the US company itself is not present, it typically presents products at dedicated shows of its own, Apple products are on the minds of most visitors here.

Jeff Orr, from the sector company ABI Research, noted that tablet computers which run on the Android operating system owned by Google have managed to occupy 20 percent of the growing market.

But he added that while “many vendors have introduced media tablets, none are separating themselves from the pack to pose a serious threat to Apple.”

His opinion is not completely shared however by Sasha Pallenberg from the specialist internet site Netbooknews.

True, the iPad has “years of advance in terms of content” with myriad applications and its music store iTunes, and Apple “will likely remain the reference in terms of design,” Pallenberg said.

Even the resignation of Steve Jobs as Apple’s chief executive has left “only a few thousand fans” feeling like orphans, he added.

“But the tablet market has changed in recent months,” especially in Asia where Apple is less dominant, Pallenberg told AFP, pointing out that a Chinese model is available there for only €70 ($100).

He forecast that sales of tablet computers using Android would surpass those of the iPad by the end of next year.

But that is too far away for the giant Hewlett Packard, which has decided to stop making personal computers.

Asian manufacturers, meanwhile, are hanging on. Sony might announce the European launch date for its latest two models, one of which can be folded.

Another highly awaited producer is Korea’s Samsung, which Apple is pursuing worldwide for alleged patent violation.

Apple won a court ruling that prevents Samsung tablets from being sold in Germany, but the group said that will not stop it from unveiling new products at the IFA.

Media reports and internet sites have speculated about the launch of a small format Samsung tablet computer.

Other premieres are expected from Toshiba and HTC. Makers of “low-cost” tablets that start at around €200, less than half the price of an iPad, are also attracting attention, and visitors could see something from Medion, which makes computers for the hard discount German distributor Aldi.

Pallenberg said Medion might unveil a tablet that measures just seven inches (18 centimetres), compared with 10 for the Apple benchmark.

Beyond the launch of tablets, smartphones, 3D displays and other gadgets, a highlight of the show is a planned videoconference with Wikileaks founder Julian Assange early on September 6.

The anti-secrets site has been accused by US authorities of putting people’s lives at risk with its latest publication of US diplomatic cables that contained the names of sensitive sources.

The IFA will be open until September 7.