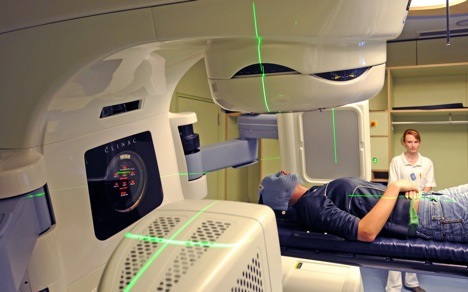 The sensor measures the concentration of dissolved oxygen in nearby tissue fluid. If this drops it can indicate aggressive growth, and doctors can be alerted.

The chip reduces the need for hospital visits by transmitting data directly to a doctor. Up until now, oxygen concentration levels could only be measured by using complex hospital machinery, like an MRI scanner.

Researchers are hoping that the device can be modified in the future so that it can also administer drugs directly to the affected area. This would make a more concentrated treatment of cancer possible, reducing dangerous side effects.

“In traditional chemotherapy you put drugs into the whole body – which can have awful side effects. We want to add a pump to our chip, so if the sensor detects growth, you can apply microscopic amounts directly to the tumour,” said project manager Sven Becker.

The chip was originally designed as method of treating tumours that are difficult to perform surgery on. “There are some tumours which are hard to remove – for example, close to the spine,” said Becker. “You risk cutting the nerve if you remove them surgically.”