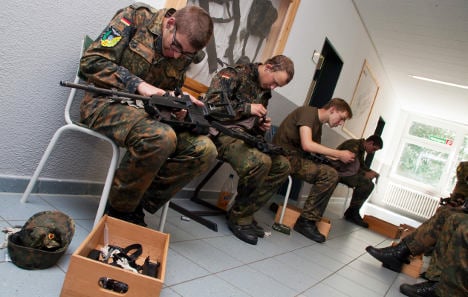 Königshaus made a list of equipment that the army is lacking, which was leaked to the Financial Times Deutschland newspaper. The document called for the shortages to be addressed immediately.

The list especially singled out ammunition of various calibres for Germany’s Afghanistan mission – the army has apparently long been complaining that it doesn’t have enough high-powered ammunition to penetrate walls.

Königshaus also reported that the army has been rationing dummy ammunition for training, leading to what he called “insufficient confidence in handling small arms.” He said the army is using outdated thermal-imaging and radio equipment in Afghanistan, and has “drastically reduced” flying hours for the German air force.

The warnings come just before the start of the German parliament’s negotiations for the 2012 budget. Chancellor Angela Merkel’s government has repeatedly underlined that recent defence cuts would not endanger soldiers’ safety.

Cuts agreed to this year saw the end of conscription and the size of the army reduced from 250,000 troops to 185,000. The government has said it is planning to gradually cut defence spending from €31.5 billion this year to €30.4 billion by 2015.

Königshaus, a member of the Free Democratic Party, the junior partner in the governing coalition, sees a direct link between the cuts and the curtailed training.

An internal statement from the Defence Ministry – also leaked to the Financial Times Deutschland – admitted to shortages, but said that there is currently “no alternative” to rationing ammunition. The statement also admitted this is having an effect on infantry training, where ammunition “is subject to limited and sometimes insufficient availability.” But the statement promised that the situation would improve in 2012.

The ministry said that another €20.5 million would be made available for ammunition in the next budget.

Königshaus wrote that many of the shortages he has uncovered are being addressed by the ministry, but criticized the pace of the changes. As an example, he pointed to a CH-53 transport helicopter that has apparently waited a year for a winch to be attached.

The government is also planning to double the compensation package for soldiers injured on duty.