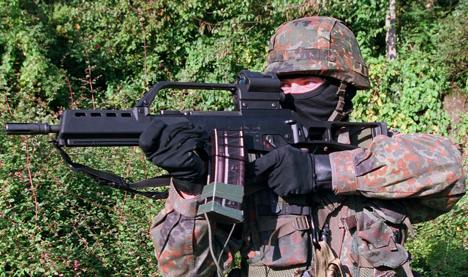 According to Wednesday’s edition of the Stuttgarter Nachrichten newspaper, as well as public broadcaster ARD, pictures prove that the rifles carry the manufacturer’s trademark.

Eye witnesses said a huge stockpile of the guns fell into rebel hands during the attack on Qaddafi’s compound in Tripoli last week. But it remains unclear exactly how many or who exported them to Libya.

The Baden-Württemberg-based Heckler & Koch, one of the world’s leading small arms makers, has ruled out that they delivered the weapons to Libya.

The German Economy Ministry also said that the government had not issued a permit for any deal to send G36 rifles to Libya. Germany has a policy of not selling weapons to conflict zones, or any country where the weapons could be used to abuse human rights.

But Germany is also the world’s third biggest weapons exporter, after the United States and Russia.

The G36 is used as a standard weapon by several military forces, including the Germany army.