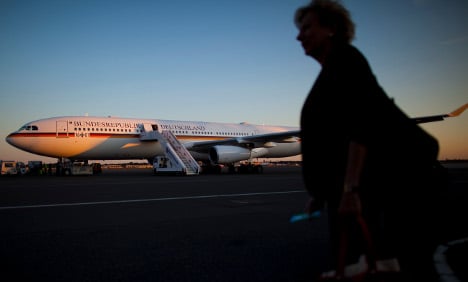 Supposed to be Germany’s answer to America’s Air Force One, the new plane started to annoy Merkel after experiencing a number of technical problems, news magazine Der Spiegel reported on Monday.

Merkel has now ordered the Defence Ministry to take the plane away and make a number of improvements.

The government fleet has suffered a series of problems in recent years – including overheated engines and a recent flat tyre in France – occasionally making the chancellor late for summits and official appearances.

She is also apparently unhappy with the fact that the new plane, named “Konrad Adenauer” after Germany’s first post-war chancellor, is too big to land in some of the world’s airports.

The Airbus A340 has a range of 13,500 kilometres, which means it can fly non-stop from Berlin to Rio or Beijing, but many international airports don’t have a runway long enough to accommodate it.

Now the Defence Ministry says Merkel wants to switch to the older government plane, which is an A310 inherited from the now defunct communist East Germany in 1990.