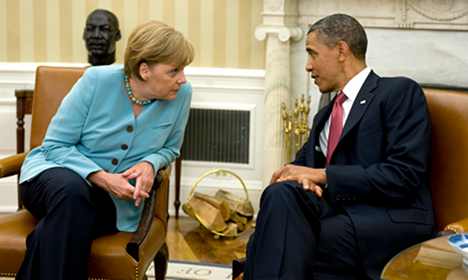 The two leaders also agreed to continue working on a statement by the Middle East Quartet group that could provide a basis for a resumption of direct talks between Israel and the Palestinians, a White House statement said.

“The two leaders agreed on the importance of concerted action, including through the G20, to address current economic challenges and to spur growth and job creation in the global economy,” the statement said.

Obama, enduring one of the roughest patches of his presidency, is preparing a speech on jobs and the deficit in September which supporters hope will contain measures to cut high unemployment and revive the recovery.

There is also concern in the United States that the Eurozone crisis could harm global economic growth and create more headwinds for the US recovery.

European authorities had a good grip on their problems.

recovery” both in the United States and Europe, he told an audience of central

“Bouts of sharp volatility and risk aversion in markets have recently re-emerged in reaction to concerns about both European sovereign debts and developments related to the US fiscal situation,” he said.

Palestinians are due to formally submit their request for statehood to UN chief Ban Ki-moon.

Israel is strongly opposed to such a move, saying negotiations are the only way to resolve the conflict and establish a Palestinian state — a position backed by Washington, which has announced its intention to block the request.

The Middle East Quartet is made up of the European Union, Russia, the United States and the United Nations.