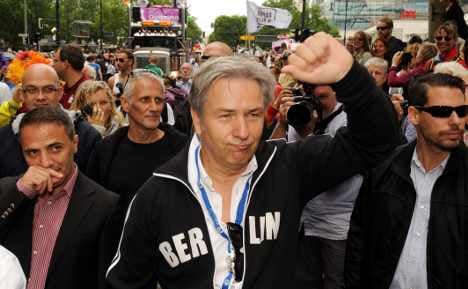 Social Democrat Wowereit, who was brought up in a Catholic family, said the Church’s teachings on sexual matters were outdated, and seemed to welcome the Benedict XVI through gritted teeth.

“I understand, and it’s also in order, that citizens are using the Pope’s visit to draw attention here to the fact that the Catholic church’s teaching represent theses that belong in past centuries, but not in the modern era,” he said.

“I have great understanding for these protests, assuming they take place within a peaceful and democratic framework. The Catholic church will have to live with that.

“This also does not contradict the hospitality we should show during a state visit.”

Wowereit said his comments were not intended to specifically encourage demonstrations against the Pope, saying, “He’s very welcome in the capital city.”

A range of groups and initiatives are planning protests in Berlin, including a large demonstration during the papal speech in the Bundestag against the Pope’s restrictive attitude toward condoms, abortion and discrimination against homosexuals.

Wowereit will meet the Pope on September 22 before the Mass at Olympic Stadium, where Benedikt XVI will sign the city’s golden guest book.

“I assume that the Pope will be informed, if it interests him, that I live with a boyfriend,” he said.

His welcome for the pontiff will be formal, he said. “The mayor is the mayor of this city – and that means that state visitors will be treated according to protocol and according to hospitality. This means that my personal life should not play the leading role,” said Wowereit.

He also said that Berlin’s new archbishop Rainer Maria Woelki was certainly not a member of the more progressive wing of the Catholic Church, but said there appeared to be an opportunity for dialogue.

“He showed himself to be prepared for dialogue during his first appearance in Berlin. This should be taken seriously and that dialogue undertaken.”

The Pope’s German visit will continue until September 25, including stops in Erfurt and Freiburg.