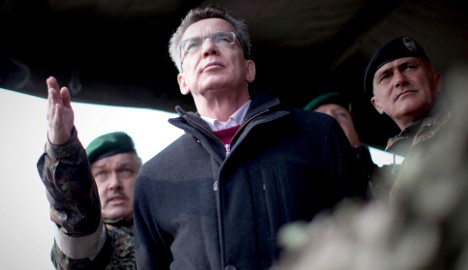 Defence Minister Thomas de Maizière told Der Tagesspiegel that he assumed a “future Libyan government will take care of its own security and won’t need help from outside.”

But de Maizière’s deputy, parliamentary defence liaison Christian Schmidt, told the daily Frankfurter Allgemeine Zeitung, that the United Nations, the European Union or NATO might find it necessary to send troops in order to stabilize Libya after Muammar Qaddafi’s regime is toppled. If that happens then in the realm of Germany’s interests and international responsibilities it could not stay away, Schmidt said.

Schmidt said an action in Libya should not be a “pure NATO-action” but Libya’s Arab and North African neighbours should take on the responsibility. “But when NATO is called upon then we’re called upon too,” he said.

Germany shocked its closest allies last spring by refusing to back the current NATO mission to protect civilians in Libya. Berlin has since repeatedly said it would help rebuild the country after Qaddafi’s ouster, but Chancellor Angela Merkel and other German officials became cagey about sending troops this week.

De Maizière instead offered to help Libya with the removal of chemical weapons. “We’re happy to help when the Libyans want it,” he told the newspaper. Overall, however, Germany doesn’t want to push anything and prefers to be in the background, he said.

In a controversial decision made in March, Germany decided not to support a UN resolution authorizing force against Qaddafi and refused to take part in the ensuing military intervention coordinated by NATO. That sparked a lot of debate – both domestically and abroad – about the country’s dependability.

Philipp Rösler, Germany’s vice chancellor and economy minister, broke with the rest of Merkel’s centre-right coalition on Friday by explicitly praising Berlin’s NATO allies for their efforts against Qaddafi.

“We owe our deepest respect and gratitude to our allies who decisively stopped Qaddafi’s murderous forces,” he told the daily Passauer Neue Presse.

His comments contrasted starkly with those made earlier this week by German Foreign Minister Guido Westerwelle, who appeared to credit UN sanctions to with Qaddafi’s ouster. That sparked renewed calls for Westerwelle, who is largely blamed for Berlin’s decision not to support the NATO effort in Libya, to resign.

But Rösler, who succeeded Westerwelle as the leader of the Free Democratic Party this spring, said the beleaguered foreign minister’s position was secure.