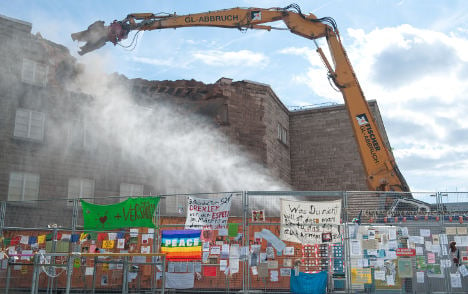 Rüdiger Grube told the Südeutsche Zeitung on Thursday that he could see holding off on the demolition of the south wing of the station until after the expected vote in November as long as “there are no financial or legal disadvantages for us and that the project will not be delayed any further.”

He said he wanted a guarantee from Winfried Kretschmann, the state premier of Baden-Württemberg, to that effect.

Voters in the southwest German state go to the polls at the end of November to express their views on the controversial Stuttgart 21 project, which aims to turn the city into a major European rail link by moving the station underground.

A recent poll showed that more than half of the state’s voters would okay the massive project, which is expected to cost at least €4 billion.

Grube reiterated his rejection of a compromise plan that would involve a combined above- and below-ground station, cobbled together by the Stutgart 21 mediator Heiner Geissler at the end of July. The railway chief said that idea had been discussed at length in the early 1990s and rejected for good reasons.

But the Deutsche Bahn chief also admitted making mistakes. He said the Bahn would not undertake such a large project again without the express support of the population. “There shouldn’t be a feeling that decisions are being made over people’s heads,” Grube told the newspaper.

The rail project has been the centre of large-scale protests after a powerful grassroots movement developed against the plans last year. Rail operator Deutsche Bahn wants to replace Stuttgart’s existing train station with an underground one that it says would greatly improve links between Paris, Vienna and ultimately Budapest.