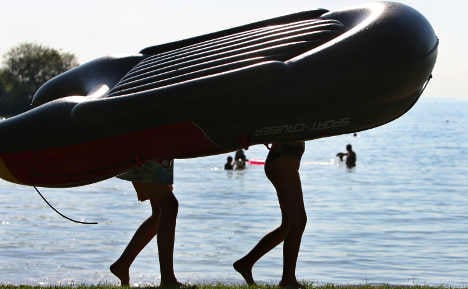 “The hot days are numbered. Probably the longest heat wave this summer is drawing to an end tomorrow, Friday,” said German Weather Service (DWD) meteorologist Christian Herold. “At the weekend, autumn has arrived.”

Thursday afternoon will be mostly warm and dry, with cloud cover possible in western Germany. Bayern will enjoy the warmest weather of summer’s last gasp, with temperatures in the south ranging from 28 to 33 degrees Celsius. Highs in other parts of the country will be between 23 and 29 degrees, with markedly cooler temperatures along the coast.

In the evening, however, thunderstorms are expected to develop in the west and move northeast, at times intensifying into severe weather, the DWD said. Elsewhere it will remain clear.

Friday morning will offer sunny skies and perhaps a few clouds, reaching 30 to 34 degrees in eastern Germany and 28 in the west. As the day progresses, however, thunderstorms, rain showers, hail and squalls may develop, with wind predominately out of the south and west. Overnight, strong thunderstorms will expand eastwards, with temperatures sinking as low as 13 degrees.

Saturday morning will bring more rain in eastern Germany. Otherwise, it will be cloudy with additional showers and thunder storms in western and northern Germany. Highs will be between 18 and 24 degrees. In the north, cool wind and squalls are possible on the coast.

On Sunday, northern Germany can expect clouds mixed with scattered showers and dry intervals. In the south, it will remain warm and mostly dry, though cloud cover is possible. Temperatures will top out at 19 degrees in the north and 24 in the south.

Next week will also show the beginning signs of autumn, the DWD said, with cool evenings, morning fog, showers and highs less than 20 degrees.

“Is the summer over then? It is to be feared,” said DWD meteorologist Martin Jonas. “The sun has markedly less strength than in June, there’d have to be an intense south to southwest airflow and warm air at high altitudes would be necessary — all of this is not in sight.”