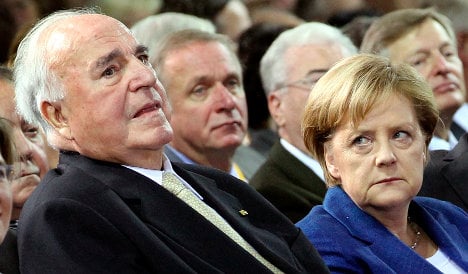 “Germany’s hasn’t been a reliable power for several years – neither domestically nor abroad,” said Kohl. “We have to be careful not to throw everything away. We desperately have to return to our former dependability.”

Kohl said recent events such as Germany’s decision not to support the efforts of its closest allies to oust Libyan dictator Muammar Qaddafi and the lacking German leadership during the eurozone debt crisis had left him dismayed.

“I have to ask myself, where does Germany actually stand today and where does it want to go,” he said. “Our friends and allies abroad are naturally also asking this question.”

The former chancellor, who presided over Germany reunification in 1990, said the foreign policy of Merkel’s centre-right coalition under the direction of Foreign Minister Guido Westerwelle appeared haphazard and without direction.

“If you don’t have a compass, and don’t know what you stand for or where you’re going, and therefore lack the will to lead, then you’ve abandoned the continuity of German foreign policy quite simply because you don’t understand such things,” Kohl said.

Kohl also pointed to the decision last spring by US President Barack Obama to visit France and Poland yet skip over Germany as a sign just how much the current government had neglected transatlantic relations.

“I never dreamed that I would live to see the time when a sitting American president comes to Europe only to fly over the Federal Republic – I could say went around it,” he said.

The 81-year-old also warned about the dangers posed by the eurozone’s sovereign debt crisis. Bailing out heavily indebted euro members such as Greece was crucial to future of the European Union, he said.

“We have no choice if we don’t want Europe to break apart,” Kohl said, adding he never would have allowed Greece to join the single currency had he still been chancellor at the time.

He said Europe needed “robust action and a package of farsighted, cleverly balanced and non-ideological measures” to ensure the euro’s stability.

Kohl served as the chancellor of West Germany from 1982 to 1990 and then led the reunified country until 1998.