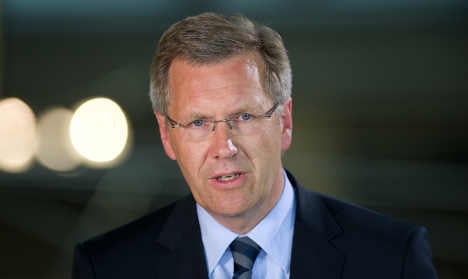 Wulff, whose role is largely ceremonial but who serves as a kind of moral arbiter in national debates, said the ECB’s recent purchase of eurozone sovereign bonds set a risky precedent, allowing those countries to avoid taking the steps needed to balance their strained public finances.

“That is asking for trouble in the long run and can only be tolerated in the interim,” he said, according to the manuscript of a speech he was to deliver, provided by his office.

Wulff, who is a member of Chancellor Angela Merkel’s conservative Christian Democratic Union, called on the ECB “to return quickly to its agreed basic principles.

“I consider the sizeable purchase of individual states’ bonds by the European Central Bank to be legally questionable,” he said.

Wulff’s comments follow similar criticism by the German central bank, the Bundesbank, which said Monday that the ECB’s purchase of sovereign bonds reduced the need for the governments concerned to adopt “appropriate financial policies.”

The ECB resumed buying eurozone sovereign bonds earlier this month, in a move aimed at taking the pressure off Italy and Spain, who faced increasing difficulty in raising fresh funds on the financial markets at reasonable rates.

The European Financial Stability Facility, Europe’s rescue fund for states facing such problems, is to take over such bond purchases from the ECB once national parliaments have approved the decision.

The German president is to sign off on the legislation, assuming it clears parliament next month, a step that is usually a formality.