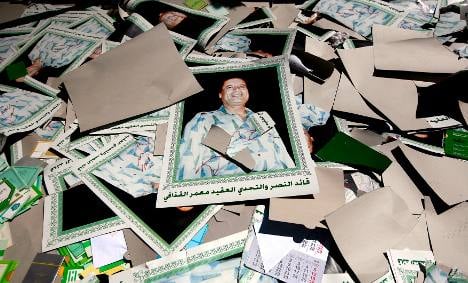 Time appeared to be running out for Qaddafi on Tuesday, even if parts of his regime appeared prepared to fight to the bitter end.

But with the rebels controlling large parts of the Libyan capital Tripoli, discussion in Germany had already turned to what will come after the quixotic dictator.

The decision by the United States, Britain and France to use air strikes and a no-fly zone to protect civilians and help the rebels fighting Qaddafi’s forces would now appear to be vindicated.

German foreign policy, however, has been left in tatters following the country’s controversial decision last March not to support a UN resolution authorizing force against Qaddafi and refusing to take part in the ensuing military intervention coordinated by NATO.

After causing consternation among Berlin’s closest allies, Chancellor Angela Merkel and Foreign Minister Guido Westerwelle have been attempting to repair the damage ever since. But both expressed unease this week about Germany’s potential role in a post-Qaddafi Libya.

Many newspapers in The Local’s media roundup on Tuesday said Germany’s refusal to get involved looked even worse now in hindsight, even if Libya’s immediate future remained far from certain.

“Berlin’s credibility on security issues has suffered long-term damage. Without a doubt, Qaddafi would have bloodily crushed the uprising … had NATO not intervened. The intervention was only possible because the UN Security Council took decisive action – a rare exception. That German diplomacy failed at just this moment, abandoning European partners Britain and France and breaking Western unity by abstaining, will have repercussions.”

The right-wing daily Die Welt hailed Qaddafi’s ousting even as it cautioned Libya’s fate was far from secure.

“But not even the blackest future that one can now imagine for Libya could justify another day of Qaddafi’s terror regime. The triumph of the Libyan revolution leaves Germany’s foreign policy disgraced to its core. Only the NATO air war – that Germany with national-pacifistic hubris boycotted – ensured the victory of the rebels.”

“After caving at the beginning of the Libyan mission in March, Berlin now apparently wants to use an opportune moment to rehabilitate its reputation. If the Germans want to skim some of the economic cream from the new order in Libya, Defence Minister (Thomas de Maizière) will hardly be able to avoid joining an international peacekeeping force.”

Berlin’s Der Tagesspiegel said even opponents of the NATO mission had to be glad it was successful in the end. But the centrist daily warned the West not to abandon Libya.

“In light of the less-than-encouraging developments in Afghanistan, it’s astonishing how carefree the West allowed itself to become involved in Libya. Libya, however, is on Europe’s doorstep. And it has oil. Strategically it’s more important for us to ensure stability around Tripoli and Benghazi than in Kandahar. At the very least, it shouldn’t be less important to us.”