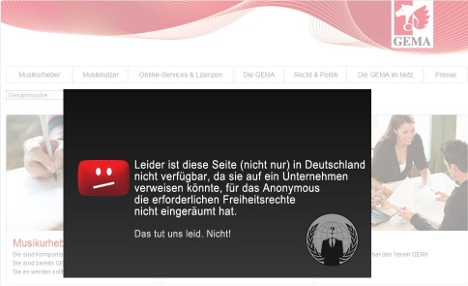 Photo: A screenshot of the hacked GEMA site.

Members of the hacker group Anonymous said on Monday they had disabled the GEMA website in order to send a message to the organization.

GEMA has been locked in a battle with Google for months over royalties for music videos on YouTube, which the US web giant owns. Instead of being able to watch the videos of many popular artists on the site, YouTube users in Germany often see messages saying the videos are blocked.

The hackers ironically played off that by slapping a message on the GEMA website similar to the one now seen on contentious videos on YouTube. Anonymous said the site was “unfortunately no longer available (not only) in Germany” because GEMA was hindering the “right to freedom.”

GEMA said it had not yet determined how the hackers had gained access to its website, but the portal Gulli.com reported internet activists had discovered a key security loophole. It is not the first run-in with hackers for GEMA. The group’s website was hit by a denial-of-service attack in June.

GEMA has faced widespread criticism in Germany for its approach towards collecting royalties for musicians. The funds it collects are distributed via a complex formula to 60,000 composers, authors and music publishers who may or may not actually have songs on YouTube.