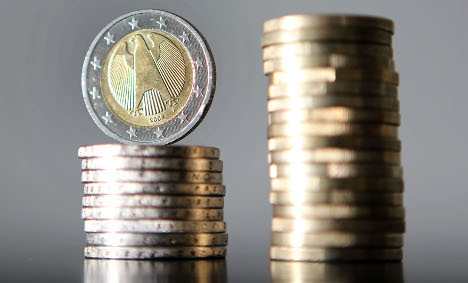 As eurozone partners work on ever tighter austerity plans to balance their books, Germany leads the pack in the strength of its finances – it had a 2010 deficit of 3.3 percent, just above the EU ceiling of 3.0 percent despite having spent heavily on stimulus programmes to offset the worst recession since 1945.

“The positive development this year will continue until 2015, which will allow us to balance the accounts in 2014,” the ministry said in a monthly report published on its website.

Germany previously aimed to balance its finances by 2016 under a law requiring the government to ensure that it does not overspend.

The public deficit – the shortfall between revenues and spending – includes regional state budgets along with those of municipalities and the national social security system.

Under the terms of the EU’s Stability and Growth Pact, governments are not supposed to exceed a public deficit of 3.0 percent of Gross Domestic Product and must work towards a balance or even surplus in times of economic growth.

Total accumulated debt, meanwhile, “will fall between now and the end of the year to 80 percent of GDP and will thus be about three percentage points lower than in the previous year,” the ministry’s report said.

In 2015, Germany forecasts public debt equivalent to 71 percent of GDP, down from 2010’s 83.2 percent – still well above the EU limit of 60 percent but positive compared with, for example, Italy’s 120 percent.

Germany, which underwrites a large share of the eurozone rescue packages, is getting its own finances in order on the back of strong economic activity that has helped cut unemployment.

The narrowing public deficit might give the conservative-liberal government coalition a chance to implement tax cuts in time for elections in 2013.

That could help boost domestic consumption which appears threatened by constant discussion of bailout packages for partner countries on the eurozone’s southern rim.

“Even people with comfortable real incomes may raise their savings rate and curtail spending for a while,” he warned.

Meanwhile Greece struggles to avoid a disastrous sovereign default, Italy is trying not be become the next country targeted by so-called sovereign “bond vigilantes” and Britain, France and Ireland are trying to tackle huge deficits.

In the United States, efforts to harness unprecedented levels of public debt are hobbled by partisan interests in Congress.

“We have a generalised problem. We have too high public sector debt and too high deficits everywhere,” German Finance Minister Wolfgang Schäuble told Deutschlandfunk radio on Monday.

In July, the news magazine Der Spiegel said that Berlin deserved the title “best in class” but efforts to cut the deficit further will run up against pressure from contributions Germany will have to make to various eurozone rescue funds.

Germany will be the biggest creditor to the planned European Stability Mechanism (ESM), with an estimated payment of €4.3 billion ($6.2 billion) per year.

The ESM is slated to replace the European Financial Stability Facility (EFSF) in 2013.

Schäuble acknowledged that voices within Germany’s ruling coalition were critical about the terms of the latest EU rescue plan announced on July 21, reflecting unease among many Germans about the eurozone debt crisis.

“People are anxious and worried,” he said.

But while the economy would certainly slow down along with others worldwide, there were still indications that Germany would post growth of around 3.0 percent this year, the finance minister said.