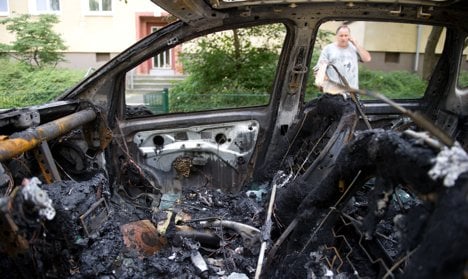 Police reported that a moped was set alight in Hohenschönhausen in the eastern part of the city during the night, while a car was burned out in the more affluent district of Charlottenburg.

In the trendy area of Friedrichshain, meanwhile, unknown vandals set fire to a digger on a construction site. More than 300 vehicles have now been set on fire in Berlin since the start of the year, though the incidents appear to have a number of different causes.

The police are currently investigating whether the incidents have any political motivation, but Friedrich described the attacks as “aggressive and brainless vandalism” in an interview on Saturday.

The minister said the attacks appear have initially had some political motivation, but that more and more incidents were simply being committed by copycats. Arson attacks on cars have now been reported in other German cities too.

Friedrich called on the Berlin authorities to be tough on the vandals and to hand down sentences swiftly in the case of a conviction. “The state has to show that it is capable of acting,” he said.

The minister also offered the help of federal forces to hunt down the perpetrators. Federal police are already providing Berlin police with helicopters to help against the arson attacks. But Friedrich emphasized that this was not a permanent arrangement.