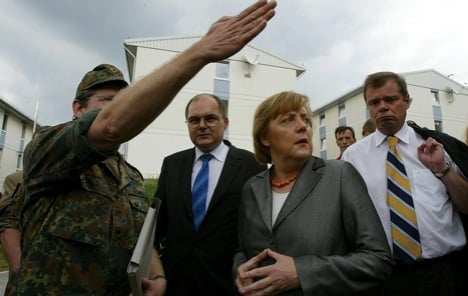 Merkel is embarking on the trip despite the financial crisis currently engulfing Europe, a decision seen by many as a strong sign of Germany’s diplomatic commitment to the region.

“Germany is back,” in the Balkans, analyst Davor Gjenero told Croatian daily Vjesnik.

It is the first time since 2003 that a leader of the German government has visited Croatia’s capital Zagreb and Serbia’s capital Belgrade.

At a time when Europe’s economic problems are likely to threaten EU enlargement, the trip is being perceived in the region as an important demonstration of the major EU and eurozone player’s interest in the Balkans.

Merkel will meet Croatian President Ivo Josipovic and Prime Minister Jadranka Kosor in Zagreb on Monday when, according to the daily Jutarnji List, she will call on officials to proceed with reforms and anti-corruption measures.

Croatia is due to the join the EU in the summer of 2013. Kosovo will meanwhile be the main topic of discussion with Serbian officials in Belgrade on Tuesday.

The visit takes place a few days ahead of the resumption of EU-mediated talks between Belgrade and Pristina in Brussels on September 2 and almost a month after violent scenes in Kosovo’s Serb-majority north.

Although Kosovo declared independence from Serbia in 2008, Belgrade considers it a southern province.

“One of my tasks will be to convince Serbia that it must resume dialogue with Kosovo,” said Merkel in her weekly podcast broadcast on the Chancellory website on Saturday.

It is up to each country in the region to “work in agreement with their neighbours to resolve conflicts peacefully and show mutual respect,” the chancellor said.

Some in Serbia fear that Merkel will put pressure on leaders to “abandon Kosovo completely,” Milan Nikolic from the Centre of Political Studies told the Blic daily.

“The most influential European countries, like Germany, Britain and France, want a swift solution in Kosovo and they see this as leaving the north to Pristina authorities,” he said.

Merkel “will insist on the fact that north Kosovo belongs,” to Pristina, former Serbian ambassador to Germany Ognjen Pribicevic told the Politika newspaper.

Belgrade will meanwhile press the case for Serbia gaining EU candidate status by the end of the year and a date for the beginning of accession talks, Serbia’s deputy prime minister Bozidar Djelic told media.

“Serbia for sure is ready to start negotiations next year and Serbia knows that it is going to take years for us to join the EU after that,” Djelic said, adding that a date for talks was important to keep the focus on the route towards European integration.

On Kosovo he said: “We certainly know that the issue needs to be solved before we join the EU. At the same time, everybody knows that we are not going to accept (the declaration of independence in 2008).”