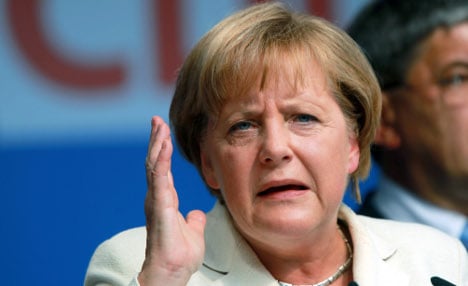 Fifty-five percent have little confidence and another 20 percent no confidence whatsoever that Merkel’s conservative-led government will be able to contain the eurozone debt crisis, the poll released by ARD public television said.

Just 22 percent of respondents said they were confident the chancellor, who is in charge of Europe’s biggest economy, can deal with the current situation, according to the poll carried out by the Infratest dimap on Tuesday and Wednesday amongst 1,001 respondents.

Merkel held a summit meeting with French President Nicolas Sarkozy on Tuesday evening to discuss how to respond to the spreading concerns that the 17 nations that share the euro will be able manage their heavy debt loads.

The European Central Bank began intervening in the bond markets earlier this month to ensure borrowing costs for Italy and Spain didn’t rise to levels they would need to seek a bailout like Greece, Ireland and Portugal.

Sarkozy also came out badly in the poll with 75 percent of Germans saying they had little or no confidence he can help solve the eurozone debt crisis.

The poll was released as the Frankfurt’s DAX index of leading shares fell by more than four percent in early trading on Friday following a drop of nearly six percent Thursday, its biggest since 2008.

Many Germans are increasingly worried about their country being asked to foot too large a bill to bail out other eurozone nations, whom they blame for mismanaging their economies and building up mountains of debt.

In addition, 71 percent of those polled confessed to understanding very little about current measures being discussed at the European level in an attempt to shore up the eurozone and improve its governance.

The poll also suggested Merkel’s government would lose an election if it were held today.