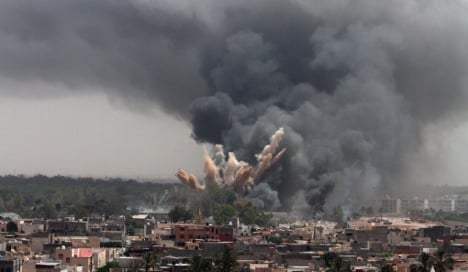 Seconding 11 Luftwaffe soldiers to the NATO command required the go-ahead from the Bundestag in the first place, MP Hans-Christian Ströbele told the state television ARD’s Morgenmagazin show on Friday morning.

That they are involved in identifying attack targets makes them indirectly involved in those attacks – something which would also need the parliament’s backing, he said.

De Maizière said the use of German soldiers in NATO commend was normal practice, and said that Ströbele was wrong in his understanding of the law. “This perception is legally incorrect,” he said.

He said if every secondment of German soldiers to NATO needed parliamentary approval, the country would not be able to fulfil its duties to the transatlantic alliance and could even be forced to leave it.

The government only admitted the participation of German soldiers in picking out targets for air strikes against the army of dictator Muammar Qaddafi after a parliamentary question from Ströbele, according to Der Spiegel magazine. A paper seen by the magazine showed that although the soldiers were involved in target assessment, they were not in leadership or decision-making positions.

“These activities mean we are secretly taking part in the Libyan war,” said Ströbele. He compared the Libyan case with the involvement of German intelligence agents in providing target information to US-led forces during the Iraq war, even though Germany was officially not taking part.

“Of course one can reject participation politically and from a moral standpoint,” a high-ranking Defence Ministry official told Der Spiegel. “But membership in NATO involves duties which one cannot simply shrug off.”

The Green party said last week it would file a constitutional complaint against the government over the army’s evacuation operation in Libya in February, saying Chancellor Angela Merkel was ignoring parliament too often.

Even though the party had no problem with the Operation Pegasus in which German soldiers evacuated 132 civilians including 22 Germans from the Libyan desert, the constitution requires any armed operation to have parliamentary approval. This was a principle which needed to be upheld, the Greens argue.