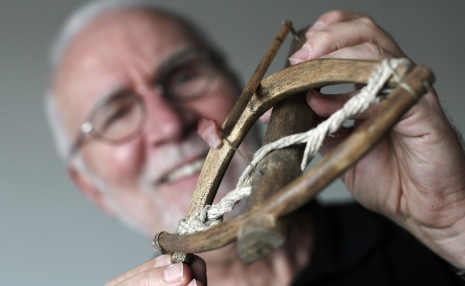 The everyday mousetrap has a long history, with different traps reflecting industrial, social and technological developments, as explored in a new exhibition which opens at the Speyer Technological Museum on Friday.

Wolfhard Klein, author of a book on the myriad mouse-catching mechanisms people have deployed down the ages – and collector of them – told The Local he had gathered 220 different traps for the exhibition.

The exhibition, Mausetod! Menschen, Mäuse, Mausefallen “Mouse death! People, Mice, Mousetraps,” is tied to his recently published book on the cultural history of the mousetrap.

Visitors will be guided through the design and workings of the most primitive models to the most modern ones – the latest are even equipped with text message notification or powered by solar energy.

One dating back to the 1940s was called Blitz, said Klein, “a reference to the then highly propagated German Blitzkrieg of World War II.”

“There’s a wide variety of killing possibilities (for mice), but actually, those have just been adjusted from methods used for humans—that’s something people can take away,” he said.

Well over 100 Germany companies have produced mousetraps since the end of the 19th century, creating at least 125 models designed to kill their victims, and 63 to catch them for release elsewhere.

Some of the traps on display in the museum are now outlawed, deemed too inhumane for continued use.

Some models were designed to catch many mice, forcing trapped rodents to continue into a second compartment, so the door could be re-opened, ready for the next one.

“In addition to the technical variation, the cultural history is also emphasized,” said Klein, adding that the exhibition includes information telling visitors about the different models and the time periods represented.

One which might attract only a few takers nowadays is the “Marine Trap,” designed to be held underwater, mouse inside, until the rodent drowns.

“It’s amazing what kind of technology people have thought up to catch these little animals,” said Corinna Handrich, spokeswoman for the Speyer Technological Museum in Rhineland Palatinate.

Klein was struck with the mousetrap bug when he noticed that encyclopaedias in the early 1980s lacked an entry for “mousetraps.”

After almost 30 years of research, collaboration and collection for an exhibition which seemed doomed never to happen, Klein’s wife set an ultimatum.

“She told me, ‘You can’t just collect (mousetraps); you have to finish the project.’”

The mousetrap exhibit will be open in the Speyer Technological Museum until November 30.