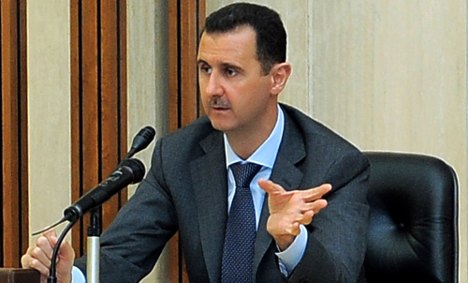 “We call on him to face the reality of the complete rejection of his regime by the Syrian people and to step aside in the best interests of Syria and the unity of its people,” they said in a joint statement.

They backed plans for stronger European sanctions against Assad and his Damascus regime, which they said continued to “violently repress their people and flatly refuse to fulfil their legitimate aspirations.

“France, Germany and the United Kingdom reiterate their utter condemnation of this bloody repression of peaceful and courageous demonstrators and the massive violations of human rights,” they wrote.

“We are actively supporting further strong EU sanctions against the regime of President Assad,” they added.

“We urge the Syrian regime to stop all violence immediately, to release all prisoners of conscience and to allow free access to the United Nations for an independent assessment of the situation,” they said.

Berlin, Paris and London said they believed President Assad was resorting to “brutal military force against his own people,” resulting in a situation where he had “lost all legitimacy and can no longer claim to lead the country.”

“Violence in Syria must stop now. Like other Arab peoples during recent months, the Syrians demand that their rights to liberty, dignity and to choose freely their leaders be recognised,” the warned.

The three EU heavyweights said they would continue to work with the Syrian people, countries in the region and international partners to achieve a peaceful and democratic transition.