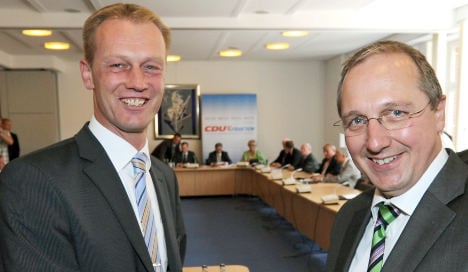 Christian von Boetticher, 40, stepped down from all his leading positions on Monday, bowing to internal party pressure over a relationship he had last year with a girl who was just 16 at the time.

This left the CDU, currently ruling the northern German state in a coalition with the Free Democratic Party, scrambling to find suitable replacements for Boetticher, who had been party leader as well being the top candidate to lead the push for re-election next year.

Jost de Jager was quickly elected to become the leading election candidate – who would become state premier if the CDU did well enough – as well as head of the state party. Now economics expert Johannes Callsen is set to be elected to lead the party’s state parliamentary party with a vote on Thursday expected to be a formality in the absence of an opposing candidate.

“Our starting position for the state election has not been made easier, but it is not bad,” said de Jager.

“We have a record of government which we can be proud of, and we will enter the election campaign with a good programme and good candidates.”

Yet despite the swift move by the party to replace Boetticher, the CDU would seem to have been seriously damaged by the affair. A poll conducted by research institute Forsa for the Lübecker Nachrichten showed that the Social Democratic Party had overtaken the CDU for the first time in a long time in Schleswig-Holstein.

The poll results published on Thursday showed the SPD on 32 percent, ahead of the CDU which were on just 30 percent. The Greens were on 19 percent, while the FDP were on 4 percent, as were the Left and a Danish grouping the SSW.

The SPD’s top election candidate Torsten Albig, currently mayor of Kiel, led de Jager in a head-to-head questioning, by 34 percent to 30 percent, although this is considered a small margin, seeing as de Jager has only been in the running since the start of the week.

Boetticher’s decision to remain as state MP means the one-vote majority held in the state parliament by the CDU/FDP coalition will be retained.