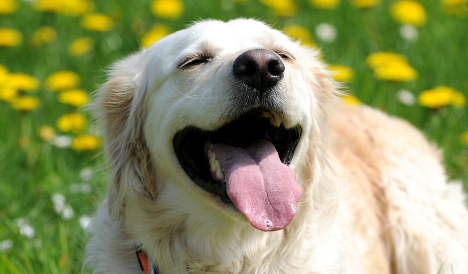 The scientists at the Schillerhöhe Hospital in Stuttgart published their research on Thursday in the European Respiratory Journal, showing that dogs were reliably able to identify lung cancer in patients’ breath samples.

Enole Boedeker wrote her doctoral thesis on the research. “In some of the tests the dogs were 95 percent accurate, and they could distinguish between samples from people with lung cancer, those with chronic obstructive pulmonary disease and healthy volunteers,” she told The Local.

She said she and the team had used four dogs – two German shepherds, one Australian shepherd and a retriever for the testing.

“They were not special dogs; we contacted a dog trainer who recommended our volunteer dogs and their owners. They were trained to sniff air from a little sample tube and they were rewarded when they lay down and kept their nose on the tube from the patient with cancer.”

She said the dogs appeared to learn very quickly, improving their sensitivity the longer they spent sniffing the tubes of breath.

The dogs were then presented with three different tests which each dog conducted ten times. The dog handler – its owner – was not told which samples were which, excluding the chance of the dog getting even inadvertent signals.

“First we gave them five tubes, one with a cancer patient’s breath, four with healthy people’s samples. Then they were given one cancer sample against four with COPD and finally a mixed one with one sample of cancer breath, two healthy and two COPD.

“One surprise was that the dogs differentiated between COPD and cancer without any difficulty – they did the second and third tests better than the first, I suppose because they became accustomed to what they were looking for – the initial test was like training for them.

“Altogether they showed 72 percent sensitivity – finding a positive, and 90 percent specificity – identifying a negative. But in some of the later tests they were 95 percent right.”

Lung cancer is very difficult to identify early as it presents few if any symptoms. There are no reliable methods of detection, although efforts are being made to try to identify volatile organic compounds thought to be linked with cancer, from people’s breath. This has not yet been possible.

There is anecdotal evidence of dogs identifying cancer in their owners – barking at moles which turn out to be cancerous for example – and experiments have been conducted by scientists in the US to see whether dogs can detect cancer from breath samples.

But this German study is the first to introduce COPD into the mix, which is important, said Boedeker, as many lung cancer patients have COPD as well.

Boedeker said she and the team which had conducted this study were already making plans to conduct more research on this topic, with more complicated tests for the dogs, including some without any cancer samples at all.

“We were surprised that the dogs did so well,” she said. “We want to continue with these dogs. We want to introduce other kinds of cancer – can the dogs differentiate between lung and other cancers – are they identifying lung cancer or cancer in general?”

She said some funding was in place to start work on the expanded study soon.