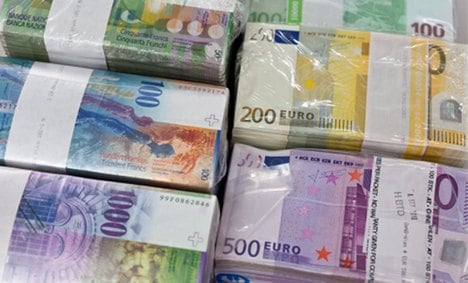 Deutsche Börse, which operates the Frankfurt stock exchange, said the tax, which German Chancellor Angela Merkel and French President Nicolas Sarkozy endorsed Tuesday, would “be a gift to non-regulated financial markets and products.”

Shares in the market operator itself were by far the biggest losers in afternoon Frankfurt trading, showing a loss of around 5.6 percent.

The federation of German mutual banks (BVR) added meanwhile that “it is to be feared that speculative transactions as well as the income sought from the financial transaction tax would migrate to other financial centres.”

In addition, such a tax “must not be allowed to have a negative impact on normal hedging activities on foreign exchange markets which are needed by companies in the real economy,” the BVR said.

Germany’s main banking federation BdB called the tax proposal a distraction from the causes of the current financial crisis, and several observers said the proposal appeared aimed at domestic audiences in Germany and France.

Deutsche Börse stressed doubts about the regulatory and fiscal impact of a broad-based tax scheme, and warned that it would be difficult to track all transactions.

Christian Muschick, an analyst at Silvia Quandt agreed, saying: “This project is not really new and has in our view only low probability of emergence as it would be very easy to be loop-holed given the global structure of the financial industry.”

Frederic Donnedieu de Vabres, head of the tax advisor firm Taxand, said: “This type of knee-jerk blanket tax is simply too complicated to implement and would require a fundamental overhaul in country-specific tax policy.

“In the current global economy where there is a very real need to focus on recovery, an overhaul of global tax harmonisation appears still to be light years away,” he added.

Claire Demesmay, at the German Council on Foreign Relations (DGAP) said that financial taxes are something typically well received by domestic populations.

And Berenberg Bank senior economist Christian Schulz noted that both Merkel and Sarkozy “are under pressure domestically, which may explain” why the tax was proposed once again.

He noted further that “chances for implementation of the tax are low.”

To avoid speculators taking advantage of global differences in financial

market regulation, “a global forum such as the G20 would be better placed to

agree such a tax, however that it is even more unlikely,” Schulz said.