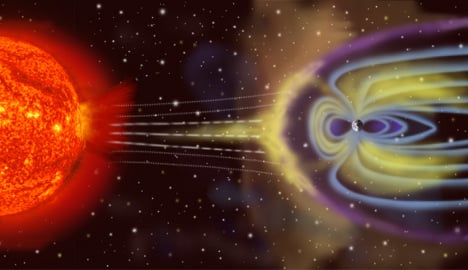 The scientists have for the first time spotted the band of antimatter particles in Earth’s magnetosphere. The particles are rare because they normally are annihilated when they come into contact with regular matter, producing a burst of energy.

In theory, they could one day be used as a fuel to accelerate spacecraft to great speeds for interstellar journeys.

Physicists from the University of Siegen in North Rhine-Westphalia were part of the team that confirmed predictions that antimatter is trapped in Earth’s magnetic field in the Van Allen radiation belt. It is the largest supply of antimatter close to Earth.

“It was expected that the particles were there, but this is the first time they have been seen. Measuring them is no easy task,” Professor Manfred Simon, a physicist who was part of the team, told The Local.

The particles are antiprotons – the negatively charged antimatter twins of protons.

According to the laws of physics, matter and antimatter are always created in equal quantities. However when they come into contact, they annihilate one another in a terrific burst of energy according to Einstein’s famous equation, E = mc2, which means that energy is equal to mass multiplied by the speed of light squared.

The antiprotons are produced by the collisions between particles in cosmic rays coming from the sun and from outside the solar system, and particles in Earth’s atmosphere. These high-energy collisions create showers of exotic particles, including antineutrons, some of which decay into antiprotons.

The antiprotons then accumulate in Earth’s magnetosphere at altitudes of several hundred kilometres.

The belt of antiprotons was spotted by the PAMELA experiment, a satellite launched in 2006 to study cosmic rays.

Antimatter is rare compared with matter and is very difficult to produce because it requires huge amounts of energy to do so, though tiny quantities of antimatter have been produced and captured for up to 16 minutes at the CERN facility outside Geneva.

While science fiction has popularized antimatter as a potential source of powerful fuel or weapons of mass destruction, in reality it is extremely difficult to produce or capture.

A report for the NASA Institute for Advanced Concepts said that antimatter “opens up exciting options for space exploration.”

The report also proposed methods for capturing the antimatter from the magnetosphere. Professor Simon, however, was a little more sceptical.

“Certainly antimatter annihilates with normal matter and in fact this is the biggest source of antimatter around the earth, but at the moment we have no way you might control these processes.”

The team, which was led by the University of Bari in Italy but comprises scientists from several countries, reported their findings in the August issue of Astrophysical Journal Letters.